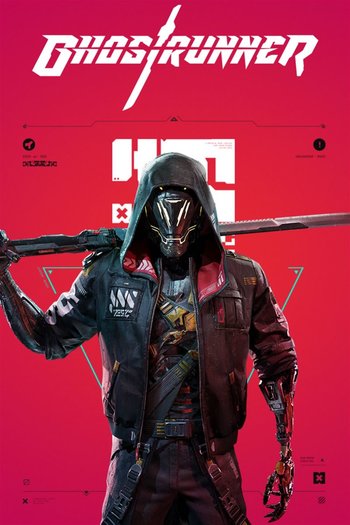 Welcome to the future.
It's gonna kill you.
Advertisement:

Ghostrunner is a first person action platformer developed by One More Level and Slipgate Ironworks, produced by 3D Realms, and published by 505 Interactive and and All in! Games. The game's soundtrack was composed by Daniel Deluxe, and it was released on October 27, 2020 for the PC, PlayStation 4, and Xbox One, and the Nintendo Switch, PlayStation 5 and Xbox Series X|S in 2021.

The player takes the role of a Ghostrunner, a Cyber Ninja who was defeated and left for dead after failing to prevent a coup d'etat by a woman known as Mara, The Keymaster, who wants to control what is left of humanity. Now you must slice through her underlings while performing copious amounts of Combat Parkour, but be careful — one hit from an enemy will instantly kill you, in a very similar fashion to Hotline Miami, which is one the largest source of inspiration for Ghostrunner.

A Prequel DLC titled Project_HEL was released on March 3, 2022.