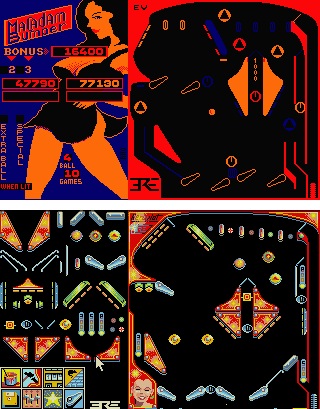 Macadam Bumper is a Video Game developed by Remi Herbulot. It was released in 1985 by ERE Informatique of France for the Amstrad CPC, ZX Spectrum, MSX, and Commodore 64.

Like Pinball Construction Set before it, Macadam Bumper is noted for allowing players to create their own Digital Pinball Tables. As expected, designers could tweak various aspects of the physics engine, then use a drag-and-drop interface to place obstacles and paint playfield graphics. Games supported up to four players, and the game came with one predefined table. Unlike Pinball Construction Set, however, some versions had no way to share your creations with other players, which severely limited its long-term appeal.

In 1987, it was ported to the Atari ST and IBM Personal Computers and released by Accolade under the name Pinball Wizard. It supported the advanced graphics of those platforms and came with four predefined tables, but was otherwise unchanged. An Apple ][ version was in development but never released.