Literature / The Wings of War 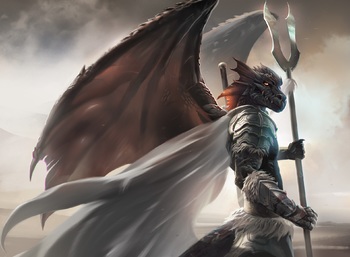 Monster. Mercenary. Gladiator. Protector. Hero.
Of one kind, and yet of another,
wings and wind bear him forth.
From chains comes his second birth
and never shall he stand for them.
Child of the Daystar, he will speak the language
and be the speaker of his people.
To leave and then return,
bearing a woman of ice and snow on his arm.
—Uhsula, Seer of the Undercaves

The Wings of War is an ongoing series of Dark Fantasy novels by Bryce O'Connor. Currently, there are five books in the series, consisting of Child of the Daystar, The Warring Son, Winter's King, As Iron Falls, and Of Sand and Snow, with a sixth and presumptive final book in the series set to be released in future.

The series follows the life and exploits of one Raz i'Syul Arro, the Monster of Karth, Scourge of the South, and Dragon of the North. Raz is an atherian, a lizard-like species native to the harsh wastes of the Cienbal desert, renowned and feared for their frightful appearance and animalistic savagery. The atherian species as a whole generally has little to no interaction with the humans of the world and vice versa, however, Raz is different. In addition to being a rare winged one of his kind, Raz was brought up by humans as a child. After being captured and subsequently left for dead in the desert by a slaver band, he was found by members of the Arro clan, a wandering desert merchant band that eventually becomes his adoptive family, teaching Raz the ways and language of man, integrating him into their society, the first known case of an atherian to do so.

You can learn more on the author's official website