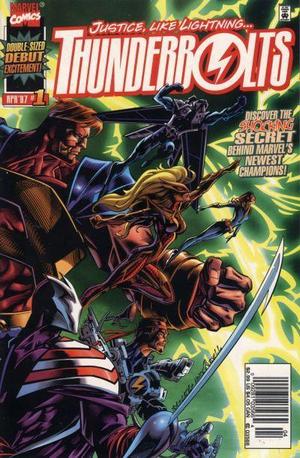 Marvel's Most Wanted
"Justice, like Lightning, should ever appear
To few men's ruin, but to all men's fear..."
—"Joseph Swetnam", Swetnam The Woman-Hater Arraigned By Women; source of the original tagline for The Thunderbolts.
Advertisement:

A Marvel Universe comic book series that appeared in 1997 (written by Kurt Busiek and drawn by Mark Bagley; the former left at issue 33, the latter lasted 16 more) as a response to the disappearance of the big name heroes like the Fantastic Four and The Avengers as a result of the Onslaught Crisis Crossover and the aborted Heroes Reborn reboot. We are presented with a new group of colorful heroes who swoop in to protect the people from danger.

There's their leader, the swashbuckling patriotic hero Citizen V; the massive size-changing Atlas, the high flying MACH-1, the mysterious Meteorite, the beautiful Songbird, and the machine-savvy Techno. They are soon warmly welcomed by New York City as their new heroes, but it is only then we discover that these "Heroes" are in fact former members of the Avengers' archfoes, the Masters of Evil: Baron Zemo, Power Man/Goliath, The Beetle, Moonstone, Screaming Mimi and The Fixer. Their plan is to use the hero ruse to win the trust of the people, so that Zemo will be granted the Avengers' old security clearances, letting him use them to perfect a master plan for domination.

It isn't long before Zemo's plan falls apart, along with the team, as a few of them discover that Good Feels Good and some others find other reasons to rebel; the remaining members are soon led by former Avenger (and fellow former villain) Hawkeye to seek redemption for their past misdeeds. The team broke up after a crossover with the Avengers, but it was created again with a new line up afterwards.

The series has experienced a fair share of cancellations and Retools since, but gained particular attention as a result of Civil War with the team now made up of newer and deadlier villains such as Venom (III, originally the Scorpion) and Bullseye, working for the government under the leadership of Norman Osborn, ruthlessly hunting superheroes who try to elude the Super Registration Act.

During the Dark Reign after Secret Invasion, Osborn is promoted to the head of all government superheroes, "officially" disbanding the Thunderbolts but retaining some members as his personal off-the-books black ops team. However, he is also having villains (including some ex-Thunderbolts) pose as heroes again, only this time as the well-known Avengers themselves in the series Dark Avengers. In parallel, he also assembles a new formation of the Thunderbolts... as another off-the-books black ops team, comprised of Paladin, Ant-Man (Eric O'Grady), Headsman, Ghost, Scourge (better known as Nuke, a Daredevil foe) and Black Widow (Yelena Belova), who is later replaced by Mr. X once it's revealed that she's not Belova but Natasha Romanoff in disguise.

At the start of the Heroic Age, following Osborn's downfall, the Thunderbolts are now the Raft (Super Villain Prison) inmate rehabilitation project. Led by Luke Cage, they are a team put together to try to set a number of villains on the path to redemption while giving a place to those who already have switched sides. The initial lineup includes a number of ex-Thunderbolts who are now heroes (Songbird, Mach V, Fixer), some of Osborn's former crew hoping to use it as a way to earn good publicity (Moonstone), the criminally insane (Crossbones), those who are caught in the Heel–Face Revolving Door (Ghost and Juggernaut), and their transportation (Man-Thing). Just before the Fear Itself event, a second "Beta" team of Raft inmates get introduced.

A new volume was announced as part of the Marvel NOW! relaunch, the new Thunderbolts series was released December 2012, initially written by Daniel Way with Steve Dillon on art, Charles Soule took over as writer with issue 12. The series will be about a new team brought together by former long time Hulk nemesis and recent Avenger, General Thaddeus "Thunderbolt" Ross aka the Red Hulk, with the initial line up consisting of Agent Venom (Flash Thompson), The Punisher, Elektra and Deadpool.

A new team of Thunderbolts returned for the All-New, All-Different Marvel initiative in 2016, this time led by the Winter Soldier. This team was virtually the same as the original line-up with two exceptions: the aforementioned Winter Soldier replacing Citizen V and Kobik, the Cosmic Cube-turned little girl first introduced during Avengers Standoff.

During King In Black, it was revealed that Mayor Wilson Fisk had purchased the name of “Thunderbolts” and used it to create a new team to act during the Knull invasion. Another team was created in Devil's Reign to enforce Fisk’s anti-vigilante law. In the aftermath of the story, a new six-issue mini-series will be launched with a new team lead by Hawkeye and under the watchful eye of Mayor Luke Cage.

A Thunderbolts movie set in the Marvel Cinematic Universe was announced at San Diego ComicCon 2022 for a 2024 release after being foreshadowed in previous entries, especially The Falcon and the Winter Soldier.

Not to be confused with the Wonderbolts, who manage to be even more colorful while facing far less drama.

Examples from all versions:

Examples from the original series:

Examples from the Warren Ellis retool: 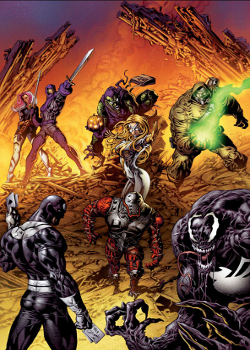 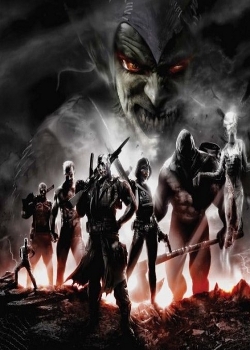 Examples from the Jeff Parker retool: 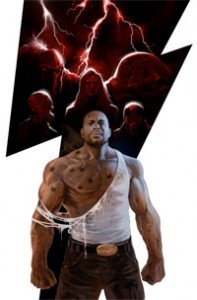