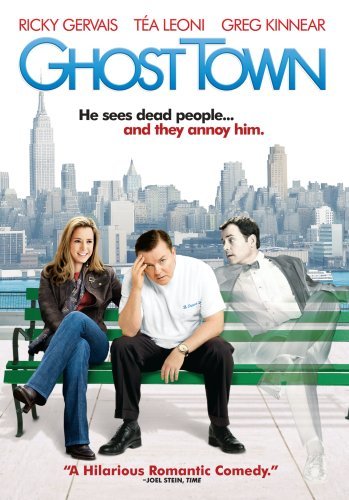 He sees dead people... and they annoy him.
"Dr. Pincus, at some point in your life, you're gonna have to stop and ask yourself the ultimate question: 'This business of being such a fucking prick...what is it really getting me?'"
Advertisement:

After suffering a near death experience during routine surgery, where he was technically dead for 7 minutes (a bit less), misanthropic dentist Bertram Pincus (Gervais) begins seeing the ghosts of people who died with unfinished business. When the ghosts realize that Pincus can see them, they begin following him around, asking for his help in crossing over. He, of course, does his best to ignore them all, but one ghost in particular finally gets his attention: Frank (Kinnear), who believes that if he can get Pincus to prevent his widow, Gwen (Leoni) from marrying a new guy that is completely wrong for her, he can finally cross over.

Not to be confused with the 1988 horror movie of the same name.