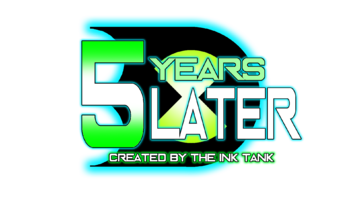 Are you ready for the future?
5 Years Later is a webcomic created by Kuro the Artist, and a crossover between Danny Phantom and Ben 10. It can be read here

Five years after the events of Phantom Planet, Danny is living a relatively peaceful life with his parents. Now that ghost-hunting is obsolete, his father, Jack, has been working on a way to use the Fenton ghost portal to access other dimensions. While he eventually seems to give up, Danny decides to continue his work for him and ends up opening a portal to the Null Void, which he chooses to explore.

One Let's You and Him Fight and a battle against a mutant To'kustar later, he ends up befriending Ben Tennyson and Rook Blonko.

Unfortunately, Danny's not the only being from his world to enter Ben's universe, and soon the two of them are forced to face off against a villain team-up of epic proportions.

The comic and extended media has a discord channel here