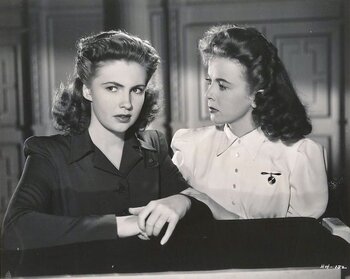 The Hard Way (1943) is a melodrama starring Ida Lupino, Joan Leslie, Dennis Morgan, and Jack Carson. The film was directed by Vincent Sherman.

Helen (Lupino) has raised her sister, Katie (Leslie), to want more out of life than the boring small-town dread of Greenhill. Their chance for escape comes when Katie falls for vaudevillian, Albert Funkel (Carson). Although not exactly where they’d like to end up, Helen knows that this is the break they’ve been looking for to finally have something in life.

Both sisters leave and Katie joins Funkel’s double act alongside his partner, Paul Collins (Morgan). Paul sees right through Helen’s machinations and detests her for them. She, however, is unbothered and continues to plot her sister’s stardom. Through Helen’s careful planning and cold manipulation, she convinces her sister to leave Funkel and chase Broadway.

Katie soon works her way up the ranks with her talents and her sister’s skill at creating opportunities. Unfortunately, several painful incidents occur to make this dazzling lifestyle less than perfect for Katie, and she begins to doubt Helen’s motivations for bringing her into this life.

Not to be confused with the 1990s film of the same name.