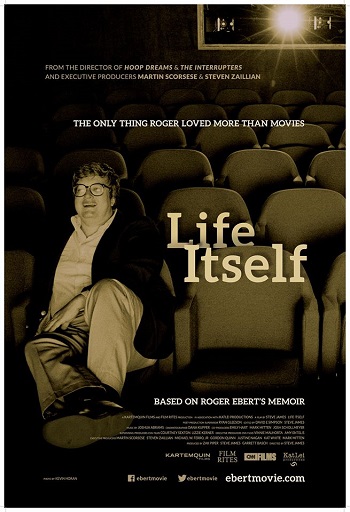 Life Itself is a 2014 documentary chronicling the life of Roger Ebert, and based upon his memoir of the same title. It was directed by Steve James (whose earlier film Hoop Dreams was famously championed by Ebert on his TV show) and produced by Martin Scorsese and Steve Zaillian.

The movie chronicles Ebert's story from his early life in Champaign-Urbana to his career as a critic, first at the Chicago Sun-Times and later on TV as half of the famous team Siskel & Ebert all the way through his death (which occurred during filming). It looks at the impact he had on film criticism as well as the industry as a whole, and includes many interviews with people who worked with him and whose careers were impacted by his reviews.