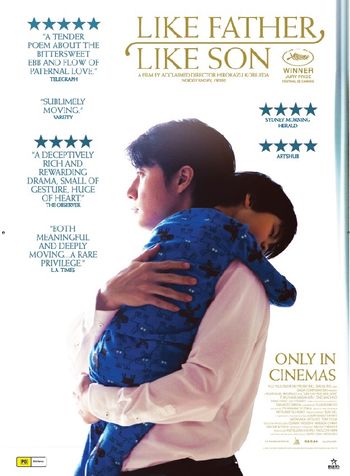 Ryota (Masaharu Fukuyama) is a successful Tokyo architect who works long hours to provide for his wife, Midori (Machiko Ono) and six-year-old son, Keita. But when a blood test reveals Keita and another baby were switched at birth, two very different families are thrown together and forced to make a difficult decision while Ryota confronts his own issues of responsibility and what it means to be a father. Like Father, Like Son extends the Japanese cinema tradition of familial exploration to deliver a gentle and moving story of personal redemption that playfully navigates its way through the drama.

(Not to be confused with a same-titled movie, about a "Freaky Friday" Flip starring Dudley Moore and Kirk Cameron.)