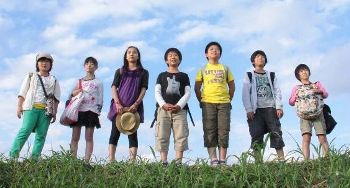 Kore-eda's focus is not on the moving gears of a plot, but in the evolving emotions of these lives, and the movie's most intense pleasure comes because it allows us to share them.
Roger Ebert

I Wish (奇跡) is a Japanese film by Kore-Eda Hirokazu released in 2011.

Koichi and Ryu are two brothers whose parents' divorce has forced to live apart. Twelve-year-old Koichi lives in Kagoshima with his mother and her aging parents, while younger Ryu has followed his father to Fukuoka. Koichi hears that when two bullet trains speed past one another, the energy released allows wishes to come true, and decides to try and wish for his family to come back together. He arranges to meet his brother halfway down the route of a new bullet train, along with some of their friends each with a wish of his or her own, and see if it works. The trip is a formative experience for all of them.