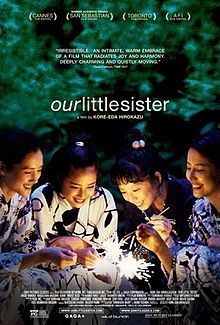 Our Little Sister is a 2015 Japanese drama by Kore-Eda Hirokazu.

The three Kouda sisters, named Sachi, Yoshino and Chika live together in a big old house that they inherited. One day, they receive news of the death of their father whom they haven't seen in 15 years. At the funeral, they meet their 14 year old half-sister Suzu Asano. As there is nobody to take care of her the oldest sister Sachi invites her to live with them.

This happens in like ten minutes. Then only daily life things happen but they have to deal with them.