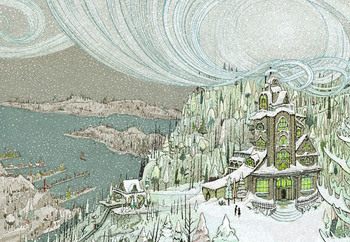 Greenglass House is a 2014 young adult novel by Kate Milford. Happily Adopted 12-year-old Milo is home for winter break, and is hoping for a relaxing time with his parents. But when your parents run an old inn, famous for having been a hideout of one of the greatest smugglers of all time, with mysterious stained glass windows in every wall, and possible hidden treasure, and then an assorted group of smugglers, scholars, and misfits show up as inn guests, all bets on a quiet holiday are off.

Milo meets the inn's cook's daughter for the first time, a girl his age named Meddy, and they make a game of figuring out the guests' secrets. Meddy plays a D&D-like game called Odd Trails, and she and Milo create characters to roleplay as, which also helps Milo get over his shyness and anxiety.

Has a direct sequel, Ghosts of Greenglass House, and a spiritual prequel of sorts, The Left-Handed Fate, with another prequel, Bluecrowne, being released in late 2018.

The books provide examples of the following tropes...