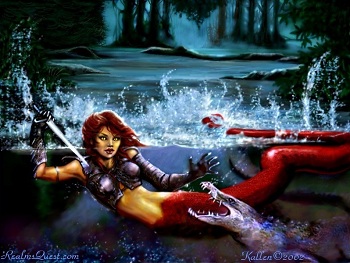 The series paladin
"I am Runya Sulemar. Come with me to the razor's edge. We'll choose our fates with another dance, striding the river red."
— Runya Sulemar, introducing herself to some Ratadoni Ranida lizard-men.
Advertisement:

is a series of novels by Thrythlind, two parts of which are written, centering around a backwoods swamp "skinner" named Tennel Grimbeck. As the story progresses, a lygiel Roquen named Runya Sulemar shares equal importance with Tennel.

The third part is in progress.

The story is set in an unnamed fantasy world within the borders of a nation referred to as "The Confederacy". The first book details the travels of Tennel from the village he lives near to the edges of the titular region, the Greenwater.

The Greenwater is an inland sea covering roughly the same area as Texas with unknown depths. Out of the sea grow gigantic trees with trunks large enough that small towns can be carved out of the layers of dead bark on the outside and with branches so thick that a column of troops can comfortably walk down them as if they were a road. These trees dominate most of the area. 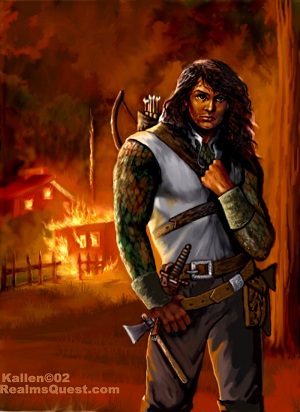 the Mesas are five large, plateau like islands that hold the majority of the region's civilization. Until the Ffolk (humans) arrived, people (with the exception of the goblin-like Lamta/Rik (self-name/Ffolk-given name)) did not live in the trees themselves, but only used them for travel. The northern most Mesa, still unsettled at the time, was granted to the Ffolk by the dominate species when they first arrived. None of the other Mesa's come into the current story, but Ratadoni, a mesa ruled by a tyrannical kingdom of lizard/dragon-men, is mentioned as an adversary.

the Middle Branches are the tangled mass of natural pathways and tunnels that can be traveled through to get from tree to tree or mesa to mesa. There is lots of wildlife in these trees and since the Ffolk started building outposts into them, scattered populations in the north.

the High Branches are incredibly tangled, like untamed wilds, usually with branches that are not thick enough or strong enough to serve as primary roadways.

the Low Branches are isolated and solitary and usually serve as a way for people to get from the Mesas to the Middle Branches.

the Dim is the area of scattered small islands in the dark places under the canopy of the giant trees. Only individual families live there and it is mostly a predator's paradise. The exception being the "Hinoitaur" race which makes its colonies in the hardest to find islands.

The plot begins with Tennel Grimbeck having a dream about a rogue "alligator" that killed his two closest friends, a married couple of fellow hunters. Due to the fact that it was known or rumored he was in love with the woman of the pair, the people in the nearby village start suspecting him of arranging the death, even to using dark powers to do it. In addition, in speaking to a taxidermist friend, he confirms that the "alligator" was actually more like what the friend had heard described as a "Greenwater crocodile". As such, he takes his substantial savings and heads off to volunteer for the militia being sent to reinforce the Greenwater colonies after the end of a war with some sort of aquatic race (not yet encountered in the story).

Note from the Author: I tend to use these pages as sounding boards for ideas as well as a form of self-promotion. For my original fictions, I do most of my troping on my own files offline, because I don't want to spoil anything...as I am want to do when ranting about my stories. However, currently most of the entries were done by me as part of a way of figuring out how to summarize the setting. From here on out, however, this page will be only occasionally updated by me specifically. (Though I might run a promotion that involves troping my stuff.)

Tropes Found In The Greenwater Novels: