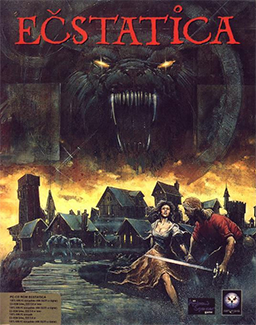 Ecstatica is an action-adventure game for MS-DOS that was released by Psygnosis in 1994 on 3½" floppy disk and CD-ROM. The game is notable for using a unique type of "ellipsoid" graphics to display characters. Each character is made of ellipsoids approximating different types of body. The environments, such as the trees and the shrubs, are also constructed in ellipsoids. This created the remarkable look of the game, as it looked much less angular compared to usual polygon-based games.

The setting is in Northern Europe in 928 AD. A traveler (the player) comes upon a town named Tirich hoping to find food and shelter. However, the town appears to be invaded by demons. The traveler must help the townspeople and lift the curse from the town by freeing the young sorceress Ecstatica from being possessed.