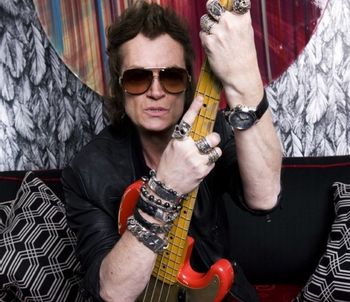 The Voice Of Rock
In this ever changing world
We live in dangerous times
When you're standing on the ledge
There's no time to think it over
Get. Into. The Void!
Advertisement:

Glenn Hughes is a British rock musician and singer. Though he got his start with the hard rock/funk band Trapeze, he's best known for his time in Deep Purple and Black Sabbath. He's also known for his incredibly diverse vocal range and the fact that age just seems to have no effect on his voice whatsoever.

Though he spent much of his career only attracting a small following, he recieved a huge spike in popularity in the early 00's when people began listening to his solo work after discovering he did other stuff besides Deep Purple and because he began collaborating with popular musicians like Slash.

Tropes For The Divine: