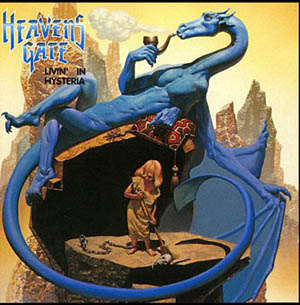 They weren't actually the most dead serious band out there. And yes, that's a blue dragon smoking a pipe.
We cross the land of the rising sun
Hope we’ll be all together
But we all gonna have some fun
And we can conquer all!
— "Rising Sun"

The band started out as a more serious outfit named Steeltower (well, as serious as metal can get). After the name-change to Heavens Gate, they gained popularity in Japan and had a semi-succesful career in the late eighties and early nineties thanks to that. Their work in the middle of their career was somewhat humorous and tongue-in-cheek, but their themes gradually darkened before their breakup in 1999.

Scroll down the page and read!