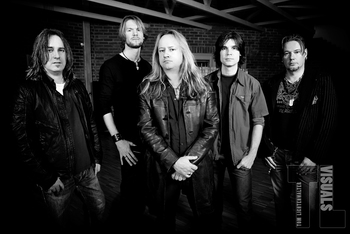 Pink Cream 69 is a german Hard Rock band. It's known for being the band where Andreas "Andi" Deris sung before leaving to be Helloween's singer.

The band was formed in 1987, after Kymera, a band formed by Deris, drummer Kosta Zafiriou and bassist Dennis Ward, disbanded. They gained their first contract by winning Metal Hammer's newcomer competition in Ludwigsburg one year after forming.

In 1994, Andi Deris left the band to join Helloween. He was replaced by David Readman.

The band, often referred to as The Pinkies, became a five-piece in 2003, when Uwe Reitenauer was hired to support Alfred Koffler, who suffered from neuropathy.

The band shows examples of