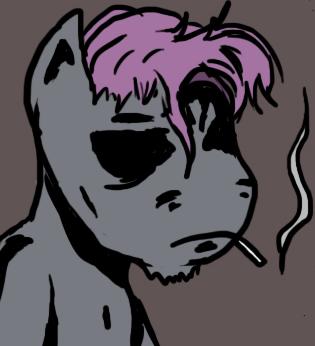 I'm not that gloomy, right?
"You ever seen a pegasi supremacist group beat a unicorn till he was whimpering and gurgling? His only crime was having a bit of bone coming out of his forehead. Talk to me then, when you've seen something like that. All ponies are equal."
—Scoops Inkstain

is a My Little Pony: Friendship Is Magic Fan Webcomic in the "ask pony tumblr" style. As the title suggests, it is about corruption in the capitol city of Canterlot and other aspects of crime in Equestria.

The tumblr's central character is an investigative journalist

named Scoops Inkstain, an earth pony who was recently fired from a local paper after writing an "inflammatory piece" about the princess. He now spreads his message as a freelance writer on the internet. Middle-aged, single, and unemployed, his frequent smoking and drinking belie chronic depression, although he denies this; it's likely that seeing too much of the dark side of Equestria has gotten to him, and his recent termination didn't help.

Scoops' journalism has revealed many elements of crime in Equestria, ranging from the Equestrian mob to schoolyard hate crimes. Though the internet is less restrictive about what he can report, Scoops has knowledge of Equestrian mob overlords that he refuses to share for fear of death, though he revealed in a personal message to Dream Baker

that one of them is called Glitz.

The Equestrian mob mostly deals in prostitution, Cloudsdale gang-warfare sweeps up innocent victims, a pegasus supremacy cult savagely beats unicorns, racism against donkeys is widespread and rampant, and Scoops Inkstain has only begun to divulge the shady side of Equestria to his hungry Internet readers.

Canterlot Is Corrupt provides examples of: