"Judgement has a way of creeping into every relationship, even the most intimate. If we're lucky, somewhere along the way we meet a few people who listen to us without criticism or reproach. We call those people our friends."
— Ben 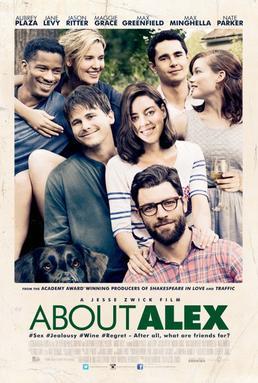 Judgement has a way of creeping into every relationship, even the most intimate.
About Alex is a 2014 American, drama, independent film written and directed by Jesse Zwick. It follows five friends from college (and one last minute addition), as they reunite in a remote house in the countryside after five years to support their friend Alex, who just survived a suicide attempt. The film deals with the relationships and unresolved issues between the main characters, as they deal with how their lives have changed since they met in college. The following are a list of characters as they appear.
Advertisement:
Advertisement: