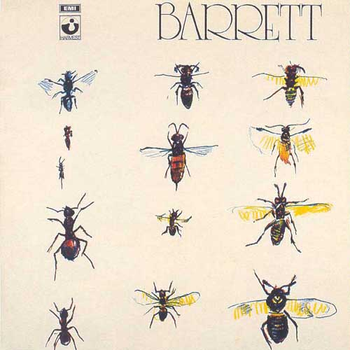 Is it obvious, may I say, oh baby, that it is found on another plane?.
Advertisement:

Barrett is the second and final studio album by Syd Barrett, released by Harvest Records in 1970.

In comparison to The Madcap Laughs which suffered from Troubled Production, recording and production went along relatively smoothly for this album. In fact it could be considered an aversion of the Outsider Music genre that Syd Barrett and Madcap are routinely labelled. Former Pink Floyd band-mate David Gilmour produces and plays bass, organ, guitar and on "Dominoes", drums; Richard Wright also contributes by playing the piano, harmonium and organ on this album. Still, sessions didn't go without trouble. At the same time, Pink Floyd was recording Atom Heart Mother, and as such was the main priority for Gilmour and Wright at the time. Barrett was caught on various occasions spying on his former band as they were recording that album. Famously, Barrett was unable or unwilling to play a song the same way more than once, as drummer Jerry Shirley said: "He would never play the same tune twice. Sometimes Syd couldn't play anything that made sense; other times what he'd play was absolute magic".

Upon release, Barrett received generally positive reviews, but the album failed to chart. Still, as with The Madcap Laughs, this album has gained a large cult following. It was also the last studio album Barrett completed. He did a live BBC session in February 1971, a brief stint with a band called Stars with Twink and Jack Monck in 1972 and abortive recording sessions in 1974, then retired from music for the rest of his life.

It's been so hard to bear with you not there.