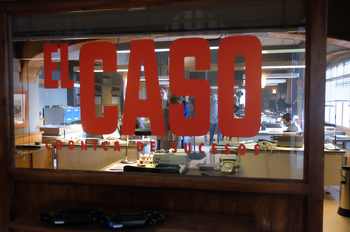 "Searching for the truth... as long as it provides a good headline."
El Caso. Crónica de sucesos (The Case. Incident Chronicle), often referred to simply as El Caso, is a Spanish television series created by Fernando Guillén Cuervo (who is also the main actor) and produced by Plano a Plano (the guys who also brought us El Príncipe and Allí abajo) for Televisión Española. It started on March 2016, and finished in June of the same year as TVE decided against renewing it for a second season. In 2018, some of the characters were brought back for a Spin-Off series to air on TVE's web platform Playz, which would focus mainly on Aparicio and Aníbal's post-El Caso career as TV reporters.
Advertisement:

The series is set in the 1960s Spain, and its main characters are the editors of weekly newspaper El Caso (which actually existed in Real Life from 1952 to 1997, and was revived in April 2016 while the series was running), who aside from reporting, also investigate on their own the crimes they cover (needless to say, this gets them in trouble more than once with the Francoist censorship and police). The main duo is the one formed by veteran editor (and former policeman) Jesús Expósito and newcomer Clara López, the rebellious daughter of Fernando López-Dóriga, the right hand of the Minister of Information (that is, the closest associate to the man in charge of the aforementioned censorship).