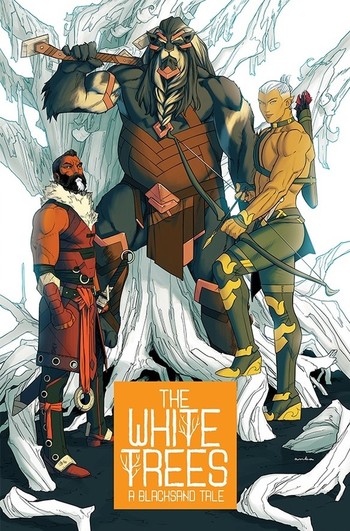 This book has everything: action, suspense, romance, Daddies.
Advertisement:

The White Trees: A Blacksand Tale is a comic mini-series written by Chip Zdarsky, illustrated by Kris Anka, and colored by Matt Wilson.

In the land of Blacksand, three warriors reside, having fought for peace for against the Trilonians twenty years prior. But when their children go missing and with war on the horizon, the three warriors are called into action again. The warriors must put aside their difference to go on one last adventure, to avoid war and hopefully bring their children home.

The White Trees is a two-comic mini-series, further Blacksand tales may follow. This series is also intended for mature readers.