Characters / The Wicked + The Divine

WARNING: Due to the nature of this comic, this page contains unmarked spoilers through Issue #33. Read at your own risk! 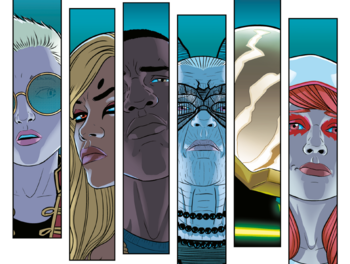 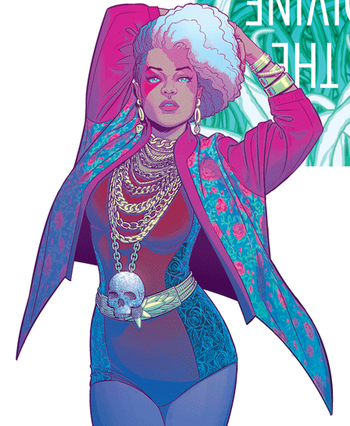 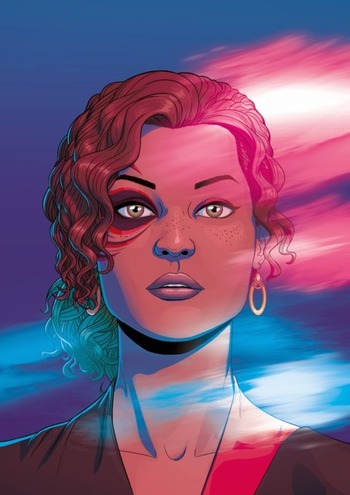 Greek goddess of vegetation and queen of the underworld. Her icon is the skull that symbolises dead gods. Her identity before the Recurrence was Laura Wilson, a fan of the Pantheon who became entangled in their shenanigans.
The Norns 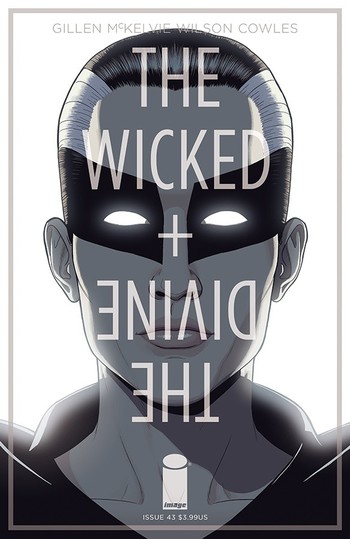 "It's all bullshit. Even if it is true."
Click here to see her pre-Recurrence. 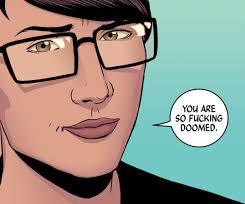 The Norse goddess of fate and seers, spinner of the threads of life. Last of the Pantheon to be awoken. Her identity before the Recurrence was Cassandra Igarashi, a blogger and outspoken critic of the Pantheon. Upon awakening, she declared her camera crew to be the other two Norns, Verðandi and Skuld, and elevated them to godhood as well. Her icon is a stylized depiction of Yggdrasil. 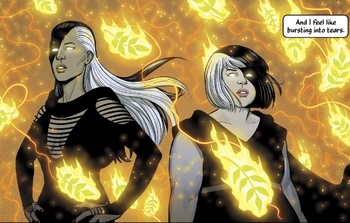 Verðandi on the left and Skuld on the right
Cass’s crew whom she ascends as the remainder of the Norns. They tend to let Cass take the spotlight in public while being her Dommes in the bedroom. 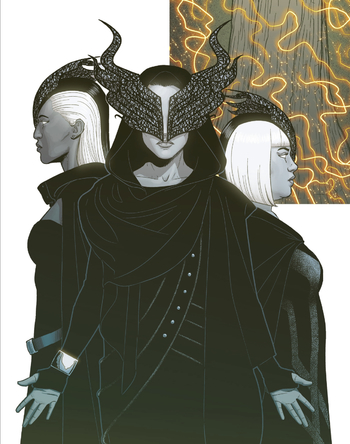 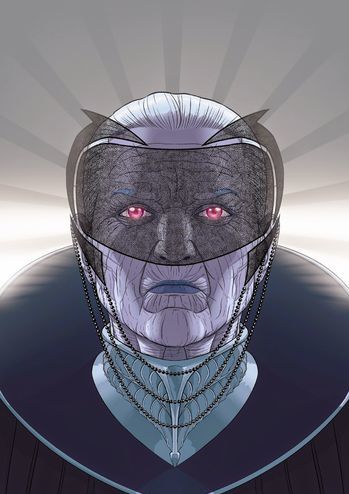 "I am necessity. And life is the last thing I have, boy."
The Greek goddess of destiny and fate. She is connected to the Recurrence, but she is not of the pantheon. Rather, Ananke is the one who appears before the next members of the Pantheon and gives them their godly powers. She also serves to aid the group, trying her best to protect them. She has no icon.
Woden 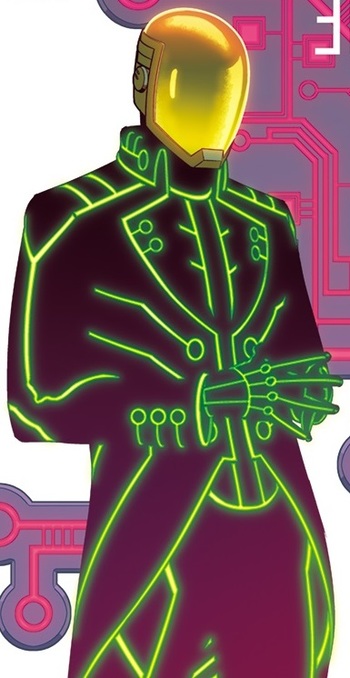 "I'd kill to be any of them rather than me."
Click here to see him pre-Recurrence. 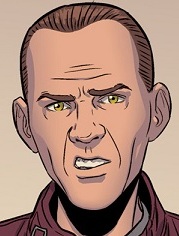 Also known as Odin, Allfather of the Norse gods. He's always seen in a technologically-enhanced suit, usually in the company of one of his valkyries, and never removes his mask. During the recurrence he's made a sort of home-base for the gods - their very own Valhalla. His icon is a winged helmet. His identity before the Recurrence was David Blake, a Pantheon researcher.
Amaterasu 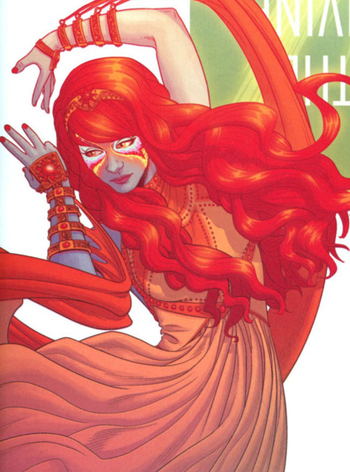 "You spend your whole life wishing you were special. And then you find out you are."
The Shinto goddess of the sun. She was (and kinda still is) Laura's favourite member of the Pantheon prior to meeting Luci. Her icon is a sun. Before becoming a goddess, her name was Hazel (originally Emily) Greenaway.
Advertisement:
Lucifer 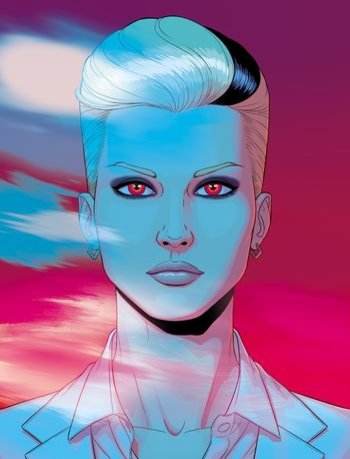 "Oh ye of too much faith."
The Prince of Lies and Christian devil. Early in the comic she is arrested for killing a judge, which she may or may not have been framed for. Her look is based off of David Bowie's Thin White Duke phase. She has an interesting relationship with Laura, a fan of the Pantheon, and tries to get the girl to help her prove her innocence. Before joining the Pantheon her name was Eleanor Rigby. Her icon is an inverted pentagram.
Sakhmet 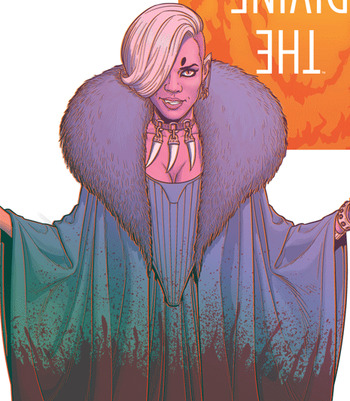 "She's made of stone. She doesn't feel anything."
Egyptian goddess of fire, vengeance, war, and healing. She's infamous for acting like a cat. Her icon is a lion's head. Her name before the Recurrence was Ruth Clarkson.
Baphomet 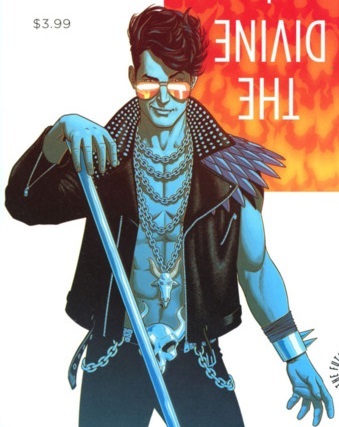 "I'm very deep and meaningful, me."
He was one of the unknown gods at the beginning of the series, and revealed himself by hijacking The Morrigan's concert while holding her (fake) severed head. He is the boyfriend of The Morrigan. In Issue #16 it is revealed that he and The Morrigan knew each other before they became gods. His icon is a goat skull with two scimitars crossed beneath it. Before becoming a god his name was Cameron. In reality, he is actually Nergal, Mesopotamian god of the underworld, the sun, lions, and war.
Minerva 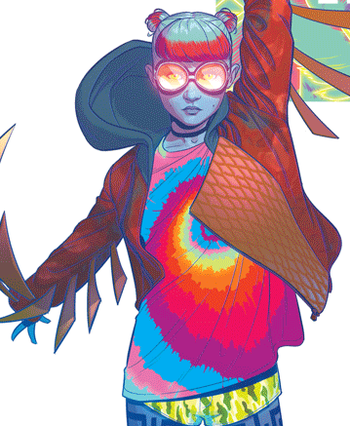 "I'm not going to be another teenage cautionary tale."
Roman Goddess of wisdom and artisans. She was incarnated into a twelve year old girl, the youngest of the Pantheon. Her icon is an owl.
The Morrigan 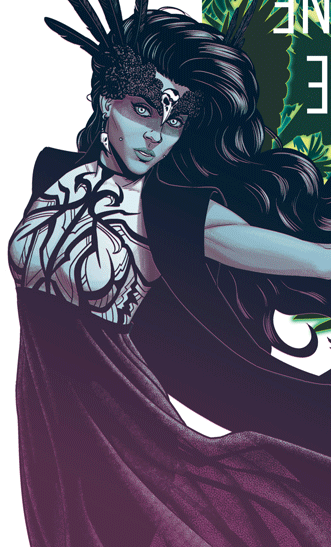 "The underworld's a stage and we are playing badly."
Irish goddesses of war. The Morrigan is actually her default form, of which there are three. When angry she becomes the violent Badb, but when very calm she can become Gentle Annie. She's one of the most mysterious members of the Pantheon, and it is very difficult to get into her concerts. In Issue #16, it's revealed that she knew Baphomet before he became a god. Her name before the Recurrence was Marian. Her icon is a skull with a raven emblazoned across the eyes.
Advertisement:
Dionysus 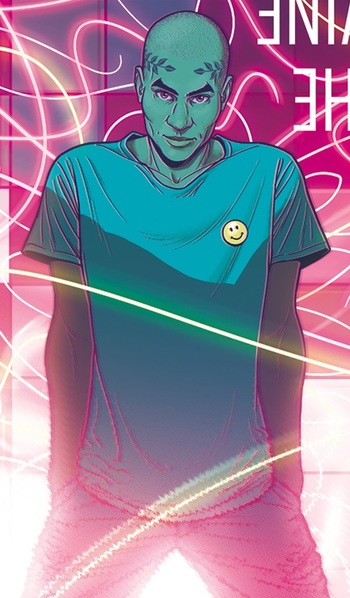 "Making people happy for a night. That's not a small thing."
The Greek God of wine and chaos. He has been underground (both in the musical and literal sense) with Baphomet and The Morrigan for a long time, but decides to reveal himself during the London Fantheon. His Icon is a bundle of pills hanging from a grape vine. Before the Recurrence, his name was Umar.
Inanna 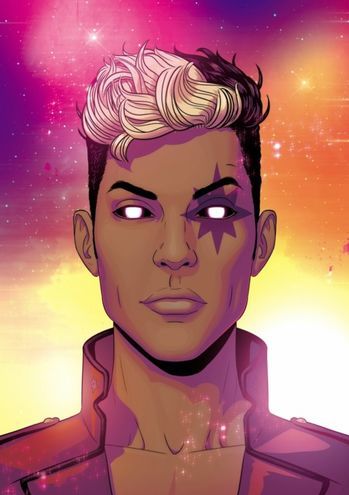 "I've got no reason to be afraid anymore."
The Sumerian goddess of love, fertility, and warfare. His incarnation identifies as nonbinary, and is designated male at birth. His icon is the eight pointed star that is often associated with Inanna in mythology. His name before the Recurrence was Zahid.
Tara 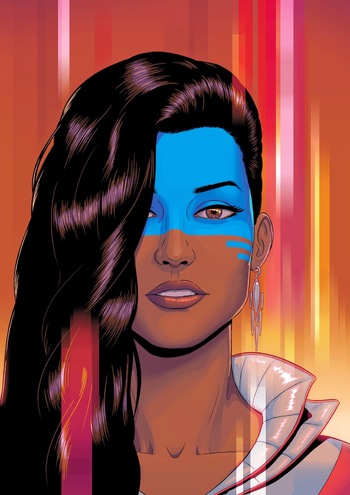 "Try to be kinder."
Fucking Tara. There are several deities that have the name Tara, and not even she knows which one she's meant to be. Nobody likes her very much. Though she has held concerts before, it seems that she no longer sees anybody. Her icon is a tragedy/comedy mask split down the middle. Her name before the Recurrence was Aruna.
Baal 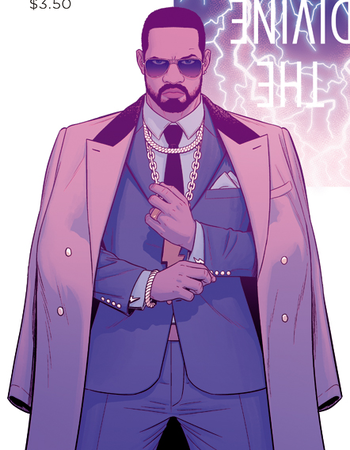 "I do lightning. And I stop your heart if I look at you the right way."
The sky god from Hebrew Mythology. Like fucking Tara, there are a few Baals in the air, but this God is specifically clarified in-story as the Canaanite Baal Hadad, which means he has dominion over lightning and power in general. His icon is a ram. His name before the Recurrence was Valentine Campbell. He is eventually revealed to be Baal Hammon and his powers involve fire, not lightning.
Mimir 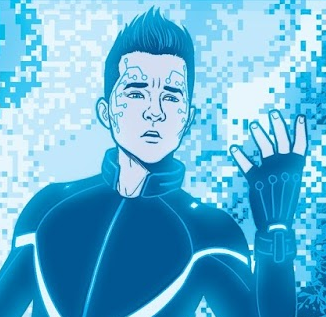 "I'm one who builds."
The member of his family who really is a god, as opposed to his father who poses as Woden (and as him). Revealed in issue #33 after Persephone and Urdr find him. His name before the recurrence was Jon Blake, the son of David Blake/Woden. 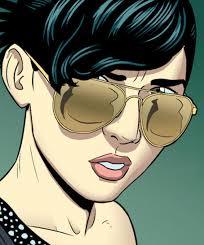 "And under the mask? Oh, it is such a mess."
One of Woden's former Valkyries, kicked out for getting recorded confirming the unsavoury rumours surrounding them. She talks smack about him at the Fantheon as revenge. Her real name is Kerry.
Laura's Parents 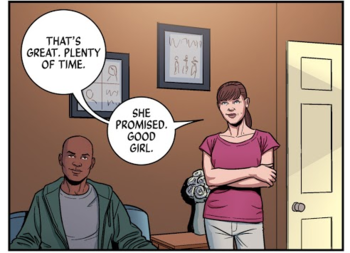 "I hope someone's looking out for them."
Laura's mixed couple parents. They really don't mind her going to see the gods.
Beth, Robin, and Toni

"Now, let's get out of here before we get blamed for any of this."
A former intern of Cass who was unceremoniously fired for accepting a bribe for information from Baal, Beth and her friends/colleagues Robin and Toni pick up where Cass left off and study the Recurrence. Beth has Cass's cynicism and determination, but lacks Cass's personal integrity. 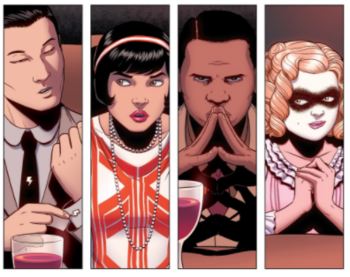 "Au revoir. Just au revoir."
The members of the previous Recurrence, which ended on December 31, 1923. All twelve of them lived to the final day; but only four of them survived to the end of the night and were seen in the prologue. Susanoo, Amaterasu, Amon-Ra, and Minerva were the last four standing. The rest died prior to the end, literally in the same night. The other gods were Neptune, Baal, Set, the Norns, Dionysus, Woden, Morrigan and Lucifer.
The Pantheon of 1831 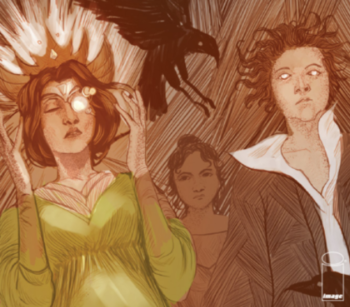 "You are a dead woman. Of course you are 'cold.'"
The members of a previous Recurrence, which ended on March 19, 1831. Much like the recurrence afterwards, four of them lived to the end, though three met their ends one fateful night and the last one was killed some time after. They are Expies of the Romantics and are each analogous to a real-life figure from that era. The members of the Pantheon were Inanna, Lucifer, Woden, Morrigan, Hades, the "angel of Soho," the "sisters of the Parsonage", Morpheus, Thoth, Hestia and Perun.
The Pantheon of 1373
Members of a previous recurrence, the stars of the very last special. Only Lucifer and two others note Minerva and Persephone are known.

General Tropes for this Pantheon:

A nun who heard the confessions of Ananke. Her icon was a demon face with several slashes across it.
The Pantheon of 455 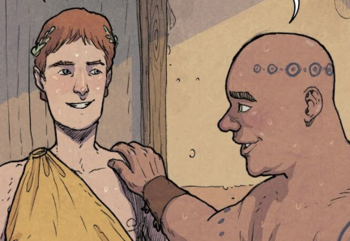 "I must be a good emperor."
Members of a previous Recurrence, which existed up to the second sack of Rome in June 455 and the fall of the Roman Empire. By the end of this Recurrence, only one of its members was left standing. Some of the members of the Pantheon include Lucifer, Bacchus/Dionysus, Baal, Mithras, the Morai, Minerva and Inanna.

A former actor, who outlived the rest of the Pantheon simply by refusing to die. His icon was an upside-down Chi-Rho.
The Original Pantheon SPOILERS 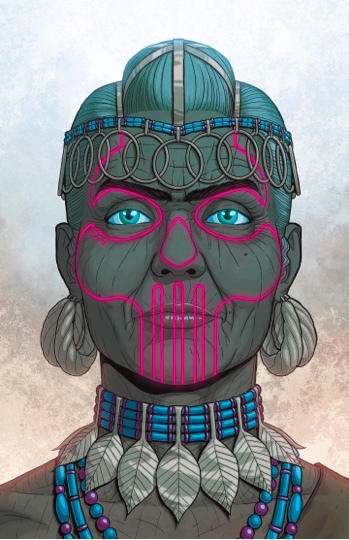 Bronze Age Catwalk
Ananke's sister during the first known Recurrence, who laid out the rules with Ananke to control the future ones.