Literature / The Broom of the System 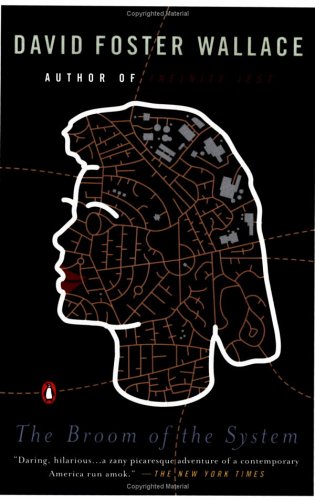 Also, the Ohio city in which most of the action takes place is in the shape of Jayne Mansfield's profile when viewed from the sky.
David Foster Wallace's first novel, published in 1987. No where near as long as the Door Stopper Infinite Jest, but still pretty healthy in size at around 450 pages.
Advertisement:

The novel focuses on Lenore Beadsman, a 24-year-old telephone switchboard operator from a wealthy and eccentric family, who isn't sure whether she exists or not. Over the course of the novel, she has to deal with the disappearance/escape of her great-grandmother, also named Lenore Beadsman, (and a number of other patients and employees) from the nursing home the Beadsman family also owns, the increasingly obvious neurotic jealousy of her boyfriend Rick/Dick Vigorous, and the sudden verbosity of her cockatiel Vlad the Impaler and his proceeding fame as the co-host of an Evangelical Christian TV show.

Of course, this just scratches the surface. The novel is primarily preoccupied with language and the power of words, and is told using various formats, including straight narrative, sections of just dialogue, therapy transcripts, tv transcripts, Rick's journal entries, and a in-universe-fictional writing by Rick centering around a man named Monroe Fieldbinder.