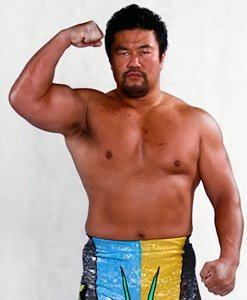 Take the Dream!
"Between the time when Inokism drank New Japan and the rise of the Rainmaker, there was an age undreamed of. And onto this, Kensuke, destined to wear the jeweled Triple Crown of All Japan upon a troubled brow. It is IQWrestler, who alone can tell thee of his saga. Let him show you the days of high adventure... So, did Kensuke come to master the riddle of Strong Style. And having no further concern, he and his companions sought adventure in the west. Many wars and feuds did Kensuke fight. Honor and fear were heaped upon his name and, in time, he became a king by his own hand... and this story shall also be told."
— Josh Barnett narrating for a Kensuke highlight video

, in the style of Akiro the Wizard from Conan the Barbarian.
Advertisement:

Kensuke Sasaki (born August 4, 1966) is a retired Japanese Professional Wrestler, famous for his work in New Japan Pro-Wrestling and other promotions. Trained by Riki Choshu, Sasaki followed him to NJPW and became one of the hottest prospects of his time, and after a long excursion abroad he formed a proverbial tag team with Hiroshi Hase. It ended prematurely when Hase left due to a dojo incident, and Sasaki ended up being more known for being part of The Road Warriors in Japan. After some matches in World Championship Wrestling and a solid reign as IWGP Champion, Sasaki was already a respected member of the business, and although he had a part on his mentor Choshu's Fighting World of Japan debacle, it only allowed him to play a traitorous heel upon his return to New Japan. However, some animosity with Choshu moved him to leave, this time for good, and Sasaki landed on All Japan Pro Wrestling, which became his new home. He then diversified into his own company, Kensuke Office (later known as Diamond Ring), and Pro Wrestling NOAH. Thus, Sasaki is one on the only two men (along with Yoshihiro Takayama) to win the major heavyweight titles of the three top promotions in Japan, NJPW, AJPW and NOAH.