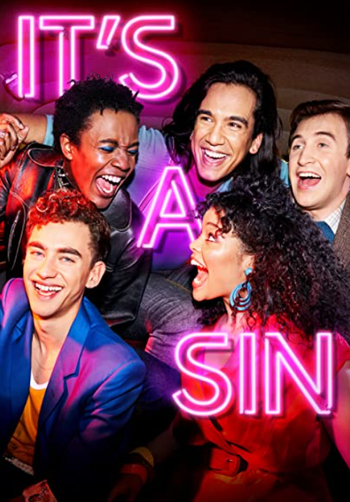 It's a Sin is a 2021 period drama from Channel 4, written by Russell T. Davies (Queer as Folk) about the lives of young gay men in The '80s and The '90s as the AIDS epidemic begins and ravages the gay community.
Advertisement:
Richie Tozer (Olly Alexander) is a university student who moves to London from the Isle of Wight. Away from his family, he is given the opportunity to explore his sexuality openly in the London gay scene alongside his close group of friends. These include: the glamorous British-Nigerian Roscoe Babatunde (Omari Douglas), who experiments with drag after fleeing his religious family; the adorable Saville Row apprentice Colin Morris-Jones (Callum Scott Howells), his kind-hearted best friend and confidante Jill (Lydia West) and on-off lover Ash Mukherjee (Nathaniel Curtis).Also stars Stephen Fry as Arthur Garrison, a fictional Tory MP and Neil Patrick Harris as Henry Coltrane, a tailor from Saville Row who opens Colin’s eyes. It was released on February 18, 2021 on HBO Max in the United States.

Not to be confused with the Pet Shop Boys song of the same title, which the series is named for and is featured in its trailers.