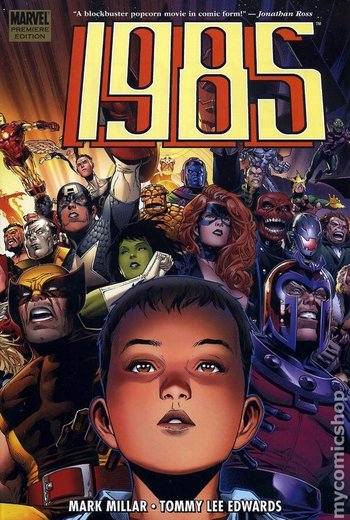 "In Nineteen Sixty-One, Stan Lee and Jack Kirby created the Marvel Comics Universe. Or so they thought..."
- Opening narration
Advertisement:

The year is 1985. Marvel Comics has just finished its first big crossover Secret Wars and has had a big change in its status quo. Spider-Man now had a black suit, the Hulk was intelligent, and Storm has a mohawk, etc.

Meanwhile, outside of the exploits of costumed adventurers, Toby Goodman is riding on the heels of his parents' divorce. To cope with this big change in his life, Toby has taken to comic books, specifically Marvel comic books. One day, a walk in the woods with his biological father Jerry leads them to the recently sold Wyncham house, a household that was once home to a childhood friend of Jerry's. And from there, things start to become weird.

Toby swears he sees the Red Skull in the house and news of people who look similar to various Marvel supervillains begin increasingly popping up. Another trip to the Wyncham house confirms Toby's suspicions: villains from the Marvel Universe are bleeding into the real world, under the control of a mysterious mutant.

Written by Mark Millar and drawn by Tommy Lee Edwards, 1985 is basically a love letter to the Marvel Bronze Age, in the style of 1980s Coming of Age films, except replacing the aliens and supernatural monsters with...well, Marvel characters.