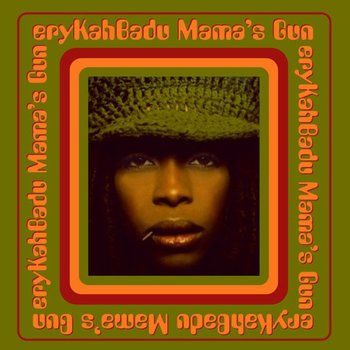 This world done changed since I been conscious
Love is life, and life is free
Take a ride of life with me
Free your mind and find your way
There will be a brighter day
- "Didn't Cha Know"

After the success of her debut record Baduizm, Badu took some time off for introspection and to raise her son. After which she returned to recording her second studio album with help from Questlove of The Roots. Due to their collaborations, Erykah would also become affiliated with the Soulquarians, a experimental black music collective that would be present during the recording of the record as well as other noted neo soul / hip hop releases of the late 90s & early 2000s (i.e Black on Both Sides, Like Water for Chocolate, 1st Born Second).

Noted for its confessional nature and groove-oriented live instrumentation, Mama's Gun would experiment with jazz, funk, soul, reggae and psychedelia, with it being favourably compared to fellow neo soul artist and Soulquarian member, D'Angelo's Voodoo. With both records coming out in the same year, experimenting with black musical styles and being recorded in Electric Lady Studios (Jimi Hendrix's recording studio).

Although commercially successful and warm critical reception, initially it would not meet the commercial expectations or critical acclaim of her debut album, however, overtime it would gain further acclaim and be considered an unique record in its own right and one of the finest neo soul records of its time. And in 2020, it would be included in Rolling Stone's 500 Greatest Albums of All Time at number 158.