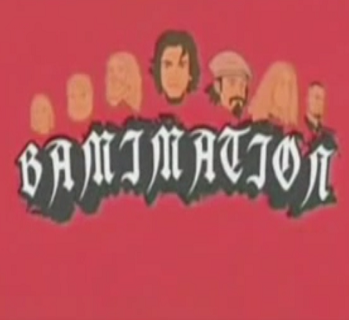 Bamimation was a cartoon pilot pitched to MTV in 2006, created by and starring Bam Margera, and animated by 6 Point Harness. The series would've followed the usual hijinks of Bam Margera and his friends and family, coupled with Cartoon Physics and gags.
Advertisement:

In the pilot, Bam Margera and Ryan Dunn discover a shrink ray invented by Rake Yohn, which they use to stir up havoc. But when they hear that Rake is going on a date with his repulsive girlfriend (whom Bam and friends nicknamed "Scabriella"), they shrink themselves into his body, and do everything they can to get the two to break up. Hilarity Ensues.

You can watch the full pilot here

The pilot contains examples of: