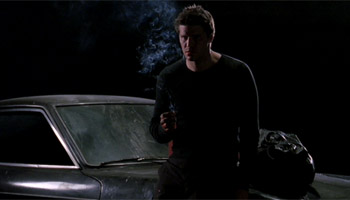 Hey ladies, got a light?
Advertisement:

With boxes in hand, Cordelia, Wesley and Gunn must face the world as the ex-employees of Angel Investigations, Inc. Angel believes that living among humans has made him weak, which has impaired him in battle against the likes Wolfram & Hart.

Lindsey and Lilah are the only survivors of the Wine Cellar Massacre. Nobody at the firm wants to associate with them, as evidenced by Lindsey's zero messages. Lilah knows what's up: They are the only survivors of a freaky murder spree, and the firm needs someone to blame. The two bruised co-workers enter Lindsey's office to find the lovely Darla and Dru awaiting their arrival. Darla had a reason for leaving two survivors, as she figures one of them will get the axe (literally), and the other will be promoted; that lucky mortal will be their liaison to the world above.

Around midnight, Drusilla and Darla arrive at the factory, curious to see how many will survive. They enter to find that Angel's arrived ahead of them; all of the demons lie lifeless on the floor. Angel is silent as he drops a lit cigarette on a trail of gasoline leading directly to the two unsuspecting she-vamps. The duo goes up like a Christmas tree, and Angel calmly retrieves his bag and leaves them to burn.

As Darla predicted, Lindsey and Lilah are both in the running to fill Holland's vacant position. Hunt Acrey has come to review their spotty work history; however, there is a bright spot. Their "vicious, destructive" competitive relationship, which keeps them both at their best, has led the Senior Partners to appoint both as joint acting co-vice presidents until the firm deems it necessary to "narrow it down."

Wesley defiantly informs Angel that he and the others will continue the "good fight", even if he won't. "Someone has to fight the war," Angel replies to himself.