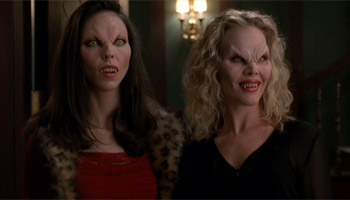 Look who's come to dinner.
The episode picks up with Gunn carrying the semi-conscious Angel into his office. Angel's barely coherent, but eventually his associates pick up that Drusilla has worked that old vamp magic on Darla. Wesley and Cordelia investigate Wolfram & Hart's plans for the duo while Angel races to prevent Darla' from becoming a vampire again. He tracks them down to a rooftop greenhouse, where he attempts to stake Darla's prone body, but Drusilla interrupts him. Darla revives as Angel and Drusilla struggle; she leaps several stories to the ground and vanishes, along with Drusilla.
Advertisement:

Darla and Drusilla brawl in the street for a while, with Darla furious at being turned against her will. Dru begins to cry and Darla comforts her in her arms. A frustrated driver walks up to them to clear the street, but instead Darla's vamp face greets him. She feeds off him, her old personality restored. Time to go shopping! Holland calls them up and encourages them to upgrade their "spree" to a massacre.

At W&H, Holland and Lindsey are glowing over the latest development when Angel rappel-wires his way through the window and demands to know where the girls are. Holland is serene in his knowledge that Angel won't harm him, because Holland is human and Angel cares too much about life, unlike himself. The police escort Angel out and put him into a patrol car with Kate. ("Perfect.") To his surprise, Kate gives Angel a tip on where the vampire girls might go and unlocks his cuffs. He's free to go.

Holland hosts a wine-tasting party for his staff in his home's wine cellar. As he praises Lindsey and Lilah for their great work, Darla and Drusilla show up unexpectedly. (Fashionably late?) They tell Holland they're following up on his suggestion for a massacre. Oops. Holland attempts to convince the duo that he and his associates are their allies, to little effect. Angel finds a survivor at the clothing store and learns where Darla and Drusilla have gone. When he arrives at Holland's home, however, he refuses to stop Darla and Drusilla, instead locking the wine cellar to prevent the lawyers from escaping.

When Angel tells his associates what he has done, they object, fearing that Angel is descending into "darkness." Angel agrees, then fires them and leaves.