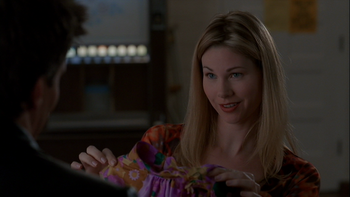 At Cordelia's apartment, Wesley and Gunn play Risk, until Cordelia tries to kick them out so she can sleep. They discuss plans to start their own company without Angel until Cordelia gets a vision about a large, two-headed, fire-flatulating demon. Angel bumps into a woman who runs a teen center. At the hotel, it is revealed that Angel took her wallet and has a dozens of pictures of her, including shots of her with Lindsey.

Wesley and Gunn slowly approach the demon in the sewers and find themselves in over their heads with the 20-foot demon.

Angel confronts Merl in his apartment, demanding information about Anne, the woman running the shelter. She's connected to Wolfram & Hart, so Angel visits the shelter and talks to her. Anne raves about Wolfram & Hart's help with the shelter, and their plans for a charity fundraiser called the Highway Robbery Ball, designed to gain donations with the help of celebrities. A large demon named Boone confronts Merl for information on Angel and Merl is persuaded to provide that information.

Angel surprises Lilah in her car and expresses his happiness at being able to play the game now that he understands that there aren't any rules. Lilah tells Lindsey how worried she is about Angel, but their discussion is cut short as Boone arrives unannounced, wanting to help Wolfram & Hart in order to deal with a grudge against Angel. Boone explains his past with Angel and the fact that they have a battle to finish.

Wesley and Gunn rave about slaying the demon and despite their incredible fear, they're excited about their victory. The group leaves to look at a prospective location for their new business while arguing over its name.

Lilah and one of her thugs accost Merl for information while Angel shows up at the shelter late at night, and uses the pretext of bringing her some clothing donations—the clothes are some that Cordelia has left at the Hyperion. Anne jokingly asks if he's stalking her. Angel offers all the evidence necessary to confirm that he is, and then tries to warn her that Wolfram & Hart are going to steal the money from the fundraiser, leaving only scraps for her. Lindsey arrives and pretends to be protecting Anne, bringing Boone with him to fight with Angel. Lindsey tries to defend the law firm to Anne but the information Angel's provided her worries Lindsey, and he discusses the dangerous possibilities with Lilah.

Wounded from the fight, Angel returns to the shelter and Anne tells Angel that she's worked out he's a vampire but that doesn't faze her (even stating she thought vampires were cool until she met one). She states that she's seen terrible things happening to kids on the streets of LA and is willing to ignore just about anything if it means aid to the shelter. Angel points out that out of all the money that will be raised at the charity ball she'll likely only see around 5% of it, but Anne tells him even that would be enough to keep the shelter running for a couple of years. Angel urges her to think about where the other 95% is going, telling her that the money she'll make from the party will have blood on it even if she can't see it. He asks her to get him inside the fundraiser, telling her he has a video tape with footage that will expose Wolfram & Hart, assuring her its the right thing to do. Anne reminds him that all she cares about is helping the kids at the shelter, and refuses..

At the Ball, a video of Holland talking about the shelter entertains those at the fundraiser. Lilah introduces Anne to one of her superiors, Nathan Reed, while Lindsey reviews the security plans for the ball. While actors pretending to be bandits collect money and jewelry from the rich attendees, Angel reveals his presence, which leads to a fight between the vampire and Boone on the balcony, and they eventually fall to the main floor. Lindsey searches for the incriminating tape, but it's revealed that Angel is not in possession of the tape and Boone is actually working with him. With Lindsey and Lilah on the other side of the room it's Anne, who had actually been persuaded to help, who is the one to get the tape to the player. Lindsey and Lilah scramble across the floor to stop her, an act which is captured on film, but fail and the tape plays... but it contains only clips of Cordelia and Wesley acting goofy for the camera. It quickly becomes clear that Angel never had anything to incriminate the lawyers in the first place—he was just trying to embarrass them, a plan that has worked thanks to their frenzied attempt to stop him. To add even more embarrassment to the situation for Wolfram & Hart, Boone has taken off with the donations. Anne confronts Angel accuses him of having no intention of exposing Wolfram & Hart's scheme, and he confirms this saying they would have only covered it up so he's willing to settle for making the firm look bad. Anne reminds him that she's lost all the charity money but Angel tells her that he doesn't care, reminding her that the money was tainted, and leaves.

Lindsey and Lilah are hauled in front of Nathan for losing the money, embarrassing the firm and hiring an assassin to kill Angel who was actually in league with him. He warns them to start accumulating victories fast, when Lindsey demands to know why they can't be allowed to just kill Angel since he's so much trouble for them. Nathan informs him that according to the various prophecies Angel will play a key role in the upcoming apocalypse. What isn't known, however, is whose side he will be fighting on. Wolfram & Hart are keen for Angel to have turned evil by that point, and his obsession with Lindsey and Lilah is hoped to help contribute to that. Nathan finishes by warning the two that Angel is invaluable while they are replaceable.

An Angel dumps his files on Anne, he finds Boone waiting for him in the hotel's lobby and isn't surprised he came back. Boone throws the bag containing the charity donations, which amounts to two-and-a-half million dollars, down in front of him willing to lay it on the line for a fight between the two of them. Angel tells Boone he's gambling a lot, and Boone responds that he has to know who would win. The two then launch themselves at each other.

Later, a battered but victorious Angel presents the money and jewelry to Anne for the shelter telling her she'll need to hide it from Wolfram & Hart. Anne, undisturbed by the real and symbolic blood on the money, accepts it.