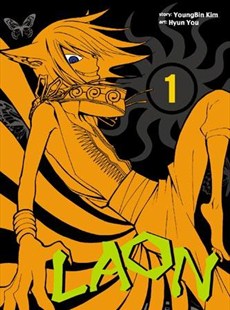 Laon (라온) is a six volume manhwa written by Young Bin Kim and drawn by Hyun You. It is published by Yen Press.

The story is about a genderbending Gumiho (Nine-tailed-Fox), who loses a bet in a game and loses all their tails. The Gumiho, Laon, goes down to Earth to search for his/her lost tails. Unfortunately, Laon's odd behavior causes lot of trouble down on Earth. Eventually, Laon finds a rather untrustworthy journalist by the name of Taeha Gwon who he/she believes will help with the search for the missing tails, whether Taeha likes it or not. The man also has his own secret past which he can't remember, revolving around his (supposedly) dead girlfriend. He initially dismisses Laon as crazy, until he sees Laon go through a wall. After finding Laon again, Taeha agrees to help Laon and forces Laon to stick with one gender because Laon's gender bending is giving Taeha a case of squick.

Soon, they get involved in some paranormal cases in the course of searching for Laon's tails. There's also a mysterious character who's interested in Laon's tails.

Laon has examples of: