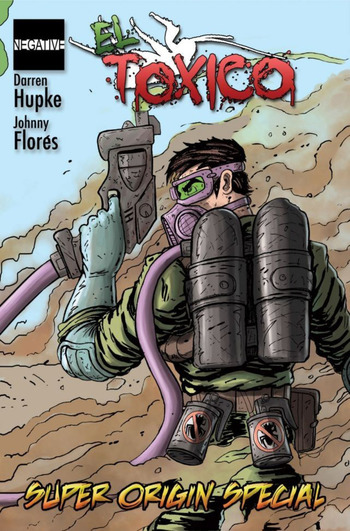 El Toxico is a Comic Book by Darren Hupke and Johnny Flores.

The insects of the world have somehow managed to grow to monstrous proportions. With their new size, they began to attack and decimate the human race. Now the world is a wasteland where humanity is just trying to scrape by while trying not to get eaten by man-sized insects.

Amidst all this, a new hero has risen. He calls himself "El Toxico", and armed with an array of weaponry designed to deal with these bugs, has vowed to rid the world of its most dangerous pest problem.

The comic achieved the funding to go to print on Kickstarter on June 2nd, 2013. The first issue was released on January 22nd, 2014.