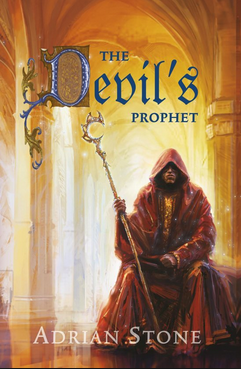 Zabatha, leader and prophet of the Cataris Cult, and most loyal servant of the forbidden god Cataris, discovers in young Marak an exceptional talent for magic. In Carolia, priests and monks can channel their gods' energies and convert them into magic. The prophet would like nothing better than to make Marak his disciple, for having the boy as their pawn could grant the Catarists total domination. Poor Marak is unaware. Worse, he is scarred for life in a way that sets him apart as an adherent of the dreaded Catarists. Fortunately, support comes from an unexpected corner. A high priestess named Verina stands up for Marak and persuades him to undergo the Test, to find out how great his talent really is. This is not without consequence. Against his will, Marak will play a vital part in the game the religious fanatic Zabatha is playing with the world...

Originally published in Dutch, an English translation has been made available in ebook-only editions. Stone later wrote a sequel, the Rune Duology.