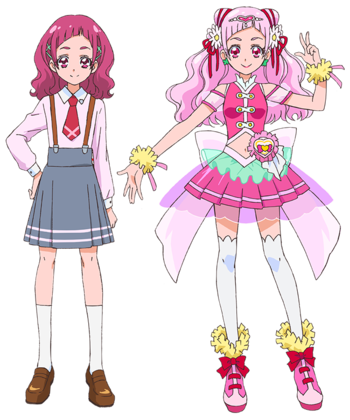 Our lively Pink Heroine. She is a New Transfer Student who dreams of becoming a stylish and mature big sister figure due to her comparatively short height. Though she is prone to making mistakes, she always sticks by her beliefs and gets back up every time she falls down. 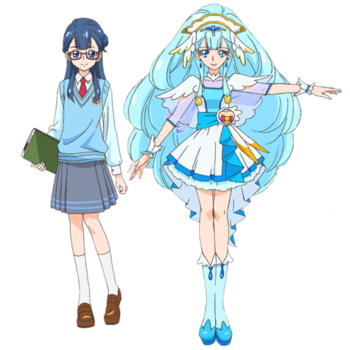 The class representative of Hana's classroom and the daughter of a well-known actress. She is a kind and gentle individual who is often compared by those around her to an angel, although she is uncertain about what she wants to do for the future.
Homare Kagayaki (Cure Étoile) 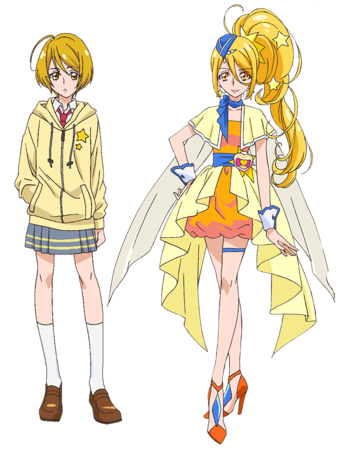 Another girl in Hana's class. She was once a figure-skating prodigy before she sustained an injury that would prematurely end her career. Though her injury has healed, she has since become colder and more aloof, although she still retains a strong desire to help those in need.
Emiru Aisaki (Cure Ma'Cherie) 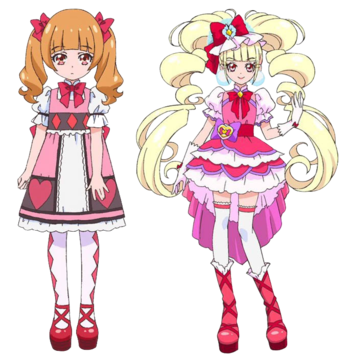 One of Kotori's classmates. She frequently worries about the well-being and safety of others, though her endeavors often lead to mixed results. She eventually becomes an admirer of the Pretty Cure and strives to help people like they do. Later on, her dream comes true when she becomes Cure Ma'Cherie alongside her friend Ruru, who becomes Cure Amour.
Ruru Amour (Cure Amour) 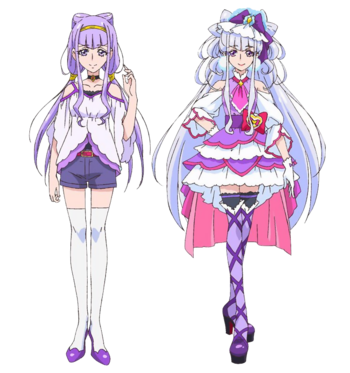 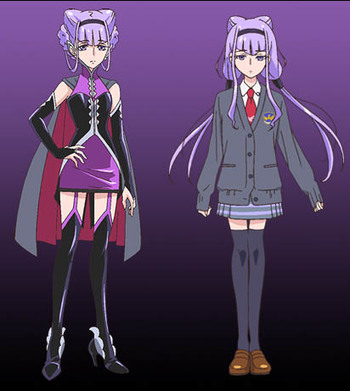 A stoic part-time worker for the Criasu. After witnessing various improbable outcomes surrounding the Pretty Cure, she infiltrates their lives to study the origins of their powers. Eventually, she finds herself becoming influenced by the nature of the things that exist beyond her comprehension, leading her to discover certain aspects about herself that she never knew she had. These new, undiscovered feelings would eventually manifest into a heart that Ruru would choose to live by instead of following orders, resulting in her defecting from the Company. Later on, she becomes Cure Amour along with her friend Emiru, who becomes Cure Ma'Cherie. 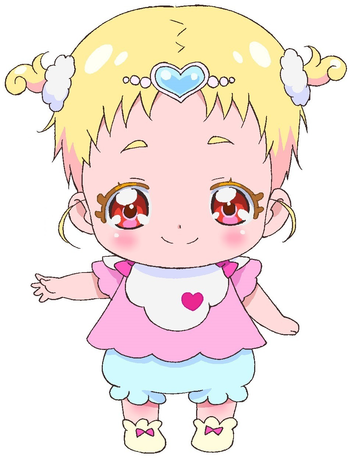 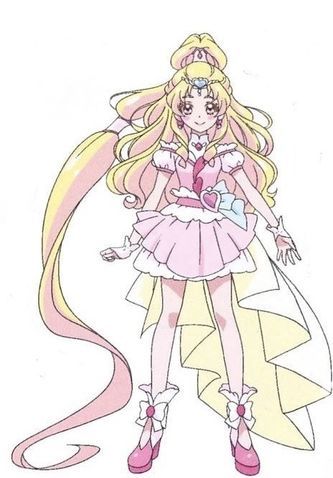 A mysterious baby who falls from the sky in front of Hana in the first episode while fleeing from the Criasu Company. Despite being just a human baby, she has surprisingly strong magical powers. 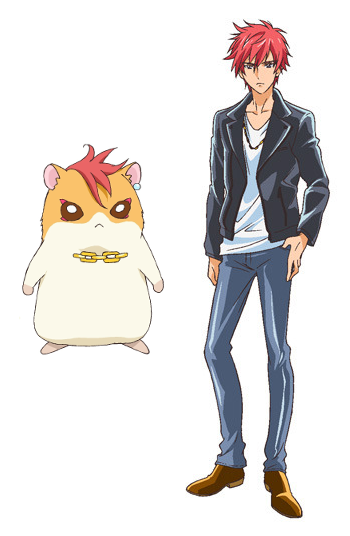 A hamster-like fairy who falls out of the sky in front of Hana along with Hugtan. He's Hugtan's main caretaker and tries to act as a mentor to the Cures, though he isn't always successful at it.

The original duo from the Max Heart duology, summoned by Hugtan at the end of Episode 21.

The third member of the Max Heart group.

The Pink Cure of the Yes! Pretty Cure 5 team.

The Pink Cure of the Fresh Pretty Cure! team along with the Weasel Mascot duo of that series.

The previous team before the Hugtto quintet.

The team that came before the Kira Kira team.

Hana's mother. She works as a reporter for a magazine.

Hana's father. He is the manager of a store called HugMan Home Center.

An aspiring actress who considers Saaya as her rival.

One of the girls' classmates. Ever since he was saved by Cure Yell, Fumito likes to preach about her awesomeness.

One of the girls' classmates. A member of the school's Orchestra Club who's always busy preparing for concerts.

One of the girls' classmates. She is Aki's best friend.

One of the girls' classmates. She is Junna's best friend.

Emiru's older brother. He has old-fashioned values and tends to boss Emiru around.

The main antagonists of the series. It is a company from the distant future and their goal is to collect Mirai Crystals as part of their CEO's plan to freeze time. The employees of the Criasu Corporation's Azababu Branch Office have the powers to attract energies from people by using Negative Wave, allowing them to create monsters called Oshimaidas.
In General 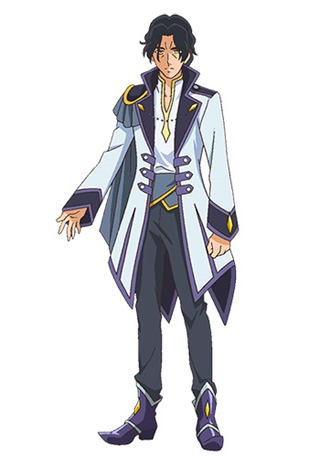 The president of Criasu and the main antagonist of the series. A mysterious adult man with an even more mysterious book who is actually an old friend of Hana from the future.
Listol

The secretary of Kurai. 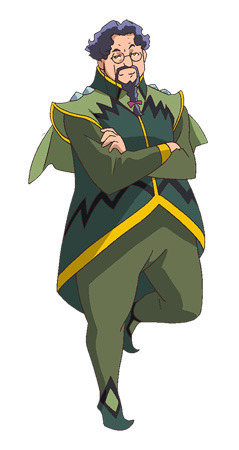 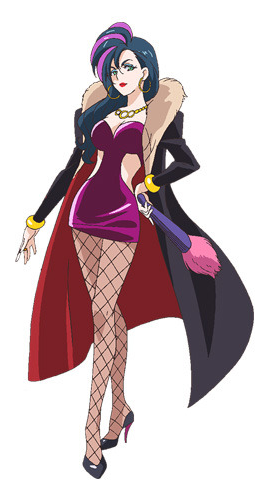 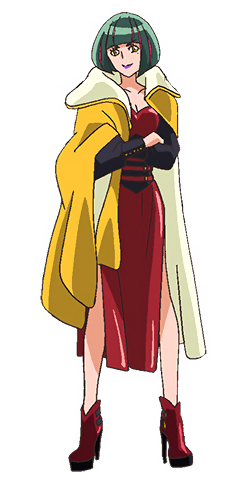 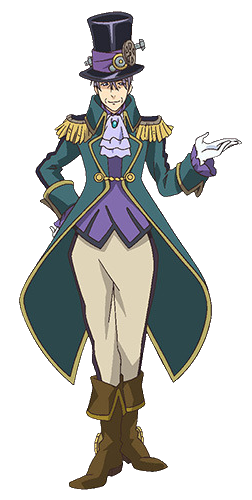 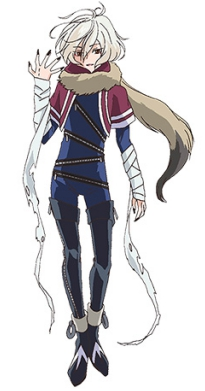 Customer specialist of the Azababu branch office.
Takumi and Jinjin 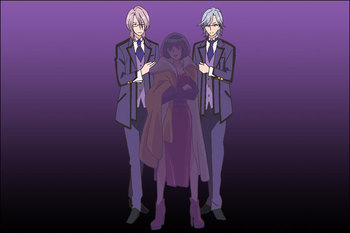