The Fey clan is headed by the Main Family — that is, the family of the Master, the most skilled and direct descendant medium of Ami Fey, the founder of the Kurain Channeling Technique (usually this is the first born daughter of the former Master) — while all other families become Branch Families.

For Mia, Maya, and Pearl Fey, all of whom are closely associated with Phoenix Wright, see the Wright Anything Agency page. One other character is a member of the Fey clan but was not raised by the clan; for that character, see the third game's Witnesses page.

The crest of the Master of the Kurain Channeling Technique
Advertisement:
Misty Fey (Maiko Ayasato)

Played by: Kimiko Yo (film) 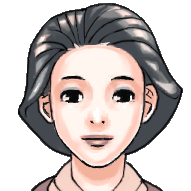 The mother to Mia and Maya, and the Master of Kurain in the first three games. She had previously disappeared in disgrace following the mishap with the DL-6 incident.

"A pure heart that knows not of the evils in this world is a powerful thing, good sir."

Pearl's mother and Misty's older sister, who appears to be the acting family head following Misty's disappearance. Despite her seniority, however, Morgan had lesser spiritual power than her sister, and was therefore stripped of her place as next in line as the Master, prompting her power-hungry husband to leave her. However, after she remarried (and divorced again), Morgan had Pearl, and believed the very powerful little girl to have power worthy of the place as the Master, with good reason. If it weren't for the fact that she's actually pretty scary, she'd almost be sympathetic. 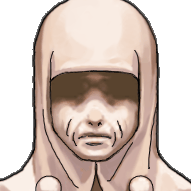 The long-since deceased founder of the Kurain Channeling Technique. 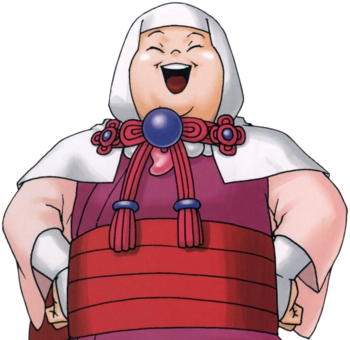 "Well, well, well. Don't worry! I'm more than up to the task! I'm a woman of faith, after all. The head honcho of Hazakura Temple."

No, her name is NOT meaningful... or is it? (It may be based on Bhikkhuni, a female Buddhist monastic.) Bikini is a member of an unnamed Branch Family and the head nun of Hazakura Temple, as well as the foster mother of Iris. "Bikini" is not her real name; people apparently keep expecting her to be a woman dressed in one. 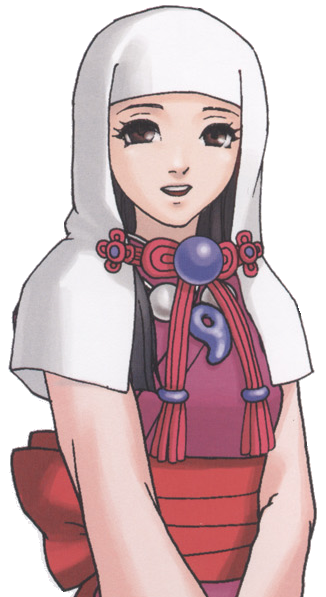 "...Um, my name is Iris. I am but a simple nun undergoing training at Hazakura Temple."

A nun of Hazakura Temple with a bizarre likeness to Phoenix's ex-girlfriend Dahlia Hawthorne, though she's never been to college and has always lived at Hazakura Temple. Evidently, despite having some knowledge of it, Iris has no spiritual power.