For Ga'ran Sigatar Khura'in, who used to be a prosecutor in her youth, see here. For the final prosecutor of The Great Ace Atttorney 2: Resolve, whose identity is a major spoiler, see here.

"I set my ATM card's number to '0001' because I'm number one!"
A legendary prosecutor, Manfred von Karma is obsessed with 'perfection' in all aspects of his life, and went forty years without a single defeat in court prior to the beginning of the series. Manfred appears as prosecutor in only one case in the first game, but his influence is felt long after he is gone. He is the father of Franziska, and was Edgeworth's guardian for most of his life.
Winston Payne (Takefumi Auchi)

"To think I saw you enter this room a fresh attorney... and now I'll see you leave in chains."
Serves as the first prosecutor to bar the player's way in the first case in the first four main games that star a defense attorney. From Phoenix, to Mia, to Apollo, they all will face this... err... rather spineless Prosecutor who has a rather high pitched, downright wimpy "Objection!" yell. Said to be a Rookie Killer.
Gaspen Payne (Fumitake Auchi)

"You'll see, Mr. Wright. I will cleanse Winston of the disgrace he met with at your hands!"
Winston Payne's younger brother, who makes his series debut just in time to prosecute one of Phoenix's trials after Phoenix regains his badge in Dual Destinies.

Returns in Spirit of Justice as the "undefeated" Chief Prosecutor in Khura'in; though there's little merit to being undefeated as Khura'in has no defense attorneys.

"It's been a while, Your Honor."
Ema's older sister, and Chief Prosecutor (as of the first game, but she hasn't been mentioned since). Went to the same law school as Mia.
Neil Marshall (Naoto Zaimon)

Jake's younger brother, and was the "King of Prosecutors" two years ago. He was the initial prosecutor on the SL-9 case.

"...Alright, I get the point. You're right, my mistake. I tend to get a little too hot-headed sometimes. You sure are one cool customer, though, Mr. Edgeworth."
A sports-loving prosecutor who appears in case one of Ace Attorney Investigations, taking over Payne's role as the tutorial prosecutor.
Byrne Faraday (Kuro Ichijo)

"Are you saying... that I'm the Yatagarasu?"
Kay's father. A prosecutor who works with Tyrell Badd in catching the Yatagarasu, as well as bringing down the mysterious smuggling ring.
Yumihiko Ichiyanagi (Sebastian Debeste)

"...Oh well. It can't be helped. There's no way someone who's so thick on the intake could have good ears."
A rookie prosecutor who fancies himself as 'the best' at his work. He first appears in the second case of Ace Attorney Investigations 2.
Advertisement:
Bansai Ichiyanagi (Blaise Debeste)

"That takes me back. When I was young, I'd always butt heads with this brash detective... A-and then one day... He just disappeared. I hope... he's still doing well..."
Sebastian's prosecutor father, and head of the Prosecutorial Investigation Committee. He used to be the Chief Prosecutor and he was the one who delivered Manfred von Karma his only penalty. His manner of dress resembles that of a WWI-era German airman. He has a tendency to play with his lighter.
Taketsuchi Auchi

"Save your breath. I've already warned you once. We are here to listen to the witness's testimony, not your outbursts, you amateur!"
Ancestor of Winston and Gaspen Payne, and, much like his descendants, serves as the prosecutor for the tutorial case. He's an old-fashioned prosecutor who doesn't seem to like the world of "cultural enlightenment".
Klimt van Zieks

Barok's older brother, and the last known victim of "The Professor". He was the Chief Prosecutor of London and had established the transferee program. 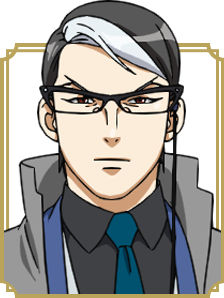 An anime-original character and prosecutor from the United States Attorney's Office.note Bear in mind, the anime forgoes the series' usual Thinly-Veiled Dub Country Change, meaning it's still largely set in Japan. He was involved with the trial that saw defendant Avery Richman falsely convicted, and is held hostage on Richman's very own luxury express train, the Silver Star, to participate in a retrial.

"Mr. Wright. You are truly the most unpredictable defense attorney I've ever known. I can tell you're grasping, yet I cannot deny the possibility of what you say."
The lovable but gullible judge of the series' Economy Cast. While something of a Cloud Cuckoolander, he always does his best to uphold the law and grant fair verdicts. Has a younger brother with a Canadian accent who is also a judge.
The Judge's Brother

"Hmm... Car thieves... I'm not sure how I feel about car thieves."
The Judge's brother, who is also a judge himself. Makes only a small handful of appearances, though his biggest role is presiding over the Terry Fawles trial in Turnabout Beginnings (3-4.)
Hakari Mikagami (Justine Courtney)

"Ah, 'Lady Justice'... blessings be upon her."
Edgeworth's rival in Ace Attorney Investigations 2, a fierce-looking (female) judge. She's part of the Prosecutorial Investigation Committee, who is determined to end Edgeworth's career as a prosecutor. She has a washboard of hair over half her face and seems to wear more traditional clothing.
Khura'in Court Judge 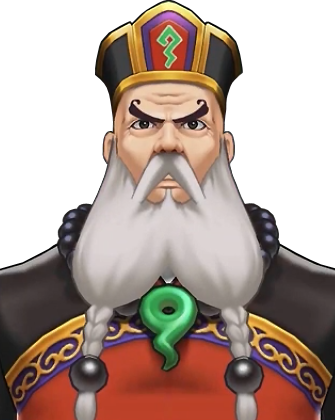 "Defense... attorney...? Ha ha ha ha! What ever are you talking about?"
The judge who presides over the High Court of Khura'in.
Seishirou Jigoku

The judge who presides over Japan's Supreme Court of Judicature, Secretary General of the Ministry of Justice, and Minister of Foreign Affairs. Oversees Ryunosuke's first case.

"My apologies. It seems I am 1 hour, 12 minutes, and 47 seconds late to our agreed time."
The Lord Chief Justice of England and Wales, who holds absolute authority over the courts. He is quite obsessed with time. Upon Ryunosuke's arrival, he appoints him to his first two cases in London.
Old Bailey Judge 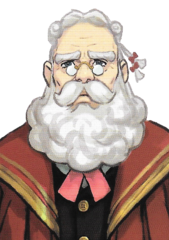 "In the name of Her Majesty the Queen, we declare this Court is now in session."
The judge who presides over the Central Criminal Court of England, otherwise known as Old Bailey.