Ace Attorney | Main Character Sheet
Wright Anything Agency (Phoenix Wright) | Defense Attorneys & Assistants | Main Prosecutors | Prosecutors & Judges | Law Enforcement | The Fey Clan | Troupe Gramarye | Kingdom of Khura'in
Original Game | JFA | T&T | AJ | DD | SOJ | AAI | AAI2 | GAA | Manga | Anime | Victims | PL vs. PWAA
The main prosecutors of the Ace Attorney series. Prosecutors are servants of the legal system whose job is to make the case against the defendants and do their utmost to find them guilty. While they are not necessarily villains, they are the antagonists that the main characters must oppose to save the innocent and find the truth of the case.

This page lists the main prosecutors of the series. Other ones can be found here.

Click here to see his portrait as a rookie prosecutor.

"There is only one thing we seek: The truth. No matter how painful it may be."
Main prosecutor of the first game, with frequent reappearances in subsequent games. By-the-book and skillful, but less than honest at first; he tampered with witnesses and coached their testimony in some earlier cases, although despite allegations in the first game, the only time he used illicit evidence, he had no idea it was forged (but that didn't stop him from using it). He's Phoenix's childhood friend, and his actions in grade school inspired Phoenix's desire to be an attorney.

He then featured as a main character in the Spin-Off series called Ace Attorney Investigations: Miles Edgeworth, taking place between the events of Trials and Tribulations and Apollo Justice. By the time of Dual Destinies, he has become Chief Prosecutor, with duties that generally keep him away from the prosecuting bench. 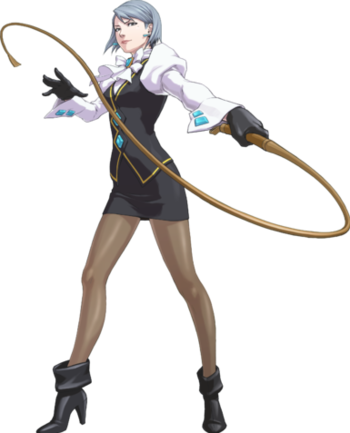 "A fool's fool fools fools who foolishly accept the foolishness of a fool's fool."
Main prosecutor of the second game, she is the daughter of Manfred von Karma and adopted sister to Miles Edgeworth (whom she refers to as her "little brother" despite being seven years his junior). Franziska is regarded as a prosecuting genius — she became a prosecutor at the age of 13 and her win record in her homeland of Germany is spotless. She intends to bring her brand of prosecution to meet Phoenix Wright in court. Franziska is an extreme perfectionist and rarely seen without her trademark whip, which she uses to intimidate and punish those around her.
Godot

"Blacker than a moonless night, hotter and more bitter than hell itself... That is coffee."
Main prosecutor of the third game. Godot is known for drinking lots of coffee, up to 17 cups per court session. Although a prosecuting rookie, he possesses legal experience that makes him a formidable foe. A suave man with a Mysterious Past, he holds strong dislike, almost hatred, towards Phoenix until the end of the last case.
Klavier Gavin (Kyoya Garyu)

Click here to see his portrait as a rookie prosecutor.

"Achtung, baby! Today we play it my way!"
Main prosecutor of the fourth game. A German rock star teen prodigy, he became a prosecutor at seventeen, has an impressive win record, and all the hallmarks of being a Wake-Up Call Boss — except that he's interested in finding the truth more than racking up wins. He returns to the courtroom after a seven-year hiatus where he spent the time working with his band. He and Apollo become Bash Brothers in their first trial together and keep at it throughout the game. He can be considered one of the series' best prosecutors, as he's the only one who makes it through his cases without failing a spot check on the evidence. He's also the first of the prosecutors not to try to kill you, maim you, conceal evidence, whip you, withhold evidence, "prepare" witnesses to lie, or otherwise cheat.

He returns in Dual Destinies, now focusing on his law career rather than his band, and he helps an investigation by recreating a mock trial with Apollo at the Themis Legal Academy. It is revealed that he is an alumnus of the school and he performs at the school concert. 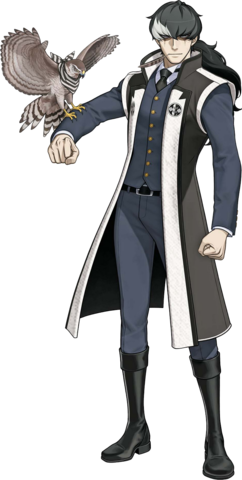 "............Hmph. Enough jabbering. Get on with it, already."
Main prosecutor of the fifth game. A gothic individual who carries a hawk named Taka on his shoulder. Trained by a master of psychology, Simon is a serious prosecutor who utilizes effective psychological techniques in his prosecution to break witnesses, defendants and even judges. Although he was successful early in his career, he was accused of murder and eventually put on death row. Before his time ran out, however, Edgeworth (now Chief Prosecutor) appointed him to prosecute a long and difficult case, leading to Blackquill earning his freedom. He now stands behind the prosecutor's bench as a free man once more, ready to show everyone that psychological warfare is no joke. 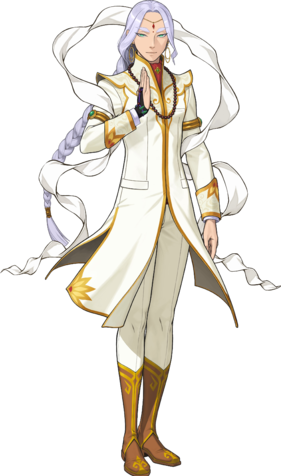 "O Holy Mother. As your humble servant, you would have me act to save this wretch's soul. I suppose this too is part my fate."
Main prosecutor of the sixth game. A native of the Kingdom of Khura'in in Asia, he puts his faith in the judicial system of his nation, believing that the Divination Séances as performed by the Royal High Priestess are inarguable. A sharp-tongued but soft-spoken monk, he cannot tolerate defense attorneys and their defiance of the Princess and will gladly send any rogue attorneys to their final judgment in the name of the "Holy Mother".

In Spirit of Justice, he's introduced as a foreign prosecutor visiting Japanifornia to study its legal system and forensic science and see how he could apply them to his own prosecution back in Khura'in. For this reason, he prosecutes cases both in Khura'in as well as in Japanifornia as he shuttles between the two countries.

"Please forgive my impudence in my partaking of the Holy Grail within these Halls of Justice."
The Death Bringer of the Old Bailey, and main prosecutor of the Great Ace Attorney Chronicles duology, Barok van Zieks is a feared prosecutor who has returned to the courts after a 5-year absence. He's gained his moniker and reputation due to the fact that defendants in his trials are doomed to death should they receive a Not Guilty verdict, dying in horrific incidents either soon after the trial is over or even years later, as long as they remain within British soil.

Like most of London's population, he has a scathing prejudice towards Japanese people and is openly disdainful of Ryunosuke, taking every opportunity to belittle him in court while sipping wine from an ornamental chalice.