Gramarye (Arumajiki) is a name used by magicians that are related to or were taught by Magnifi Gramarye, a famous magician from back in the day.

NOTE: Trucy Wright can be found on the Ace Attorney: Wright Anything Agency page.

NOTE 2: There are spoilers that cover up to the sixth game, Spirit of Justice, below. It's very highly suggested that you finish the second case of this game, The Magical Turnabout, before going down this page. Don't say we didn't warn you. 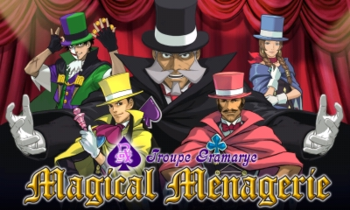 Magnifi was the teacher of Valant, Zak and Reus, as well as Thalassa Gramarye's father. Incredibly proud, strict and demanding. Magnifi liked dangerous performances, deadly enigmatic tests and had absolutely no tolerance for failure or insubordination. For many years, he performed the best magic shows the world had ever seen along with his disciples, until one day the Troupe had to disband. He was eventually diagnosed with diabetes and cancer, and a few months before he was to die, he sent a note to both Zak and Valant, Blackmailing them to solve a puzzle whose wrong solution would result in shooting Magnifi and the right solution could give the solver the rights to Troupe Gramayre's magic. Cue Magnifi's death, and the subsequent trial with Zak as the defendant and Valant as the key witness. Magnifi, of course being true to his reputation, left one last great performance in the mystery behind his death. A ruthless performer who wasn't afraid of life or death and whose deeds on life still follow his successors to this day.

"I have done many things in my life, some well, some poorly. But this is a cross we must bear alone to our graves."

Real name: Shadi Enigmar (Kagero Nanafushi) alias Shadi Smith (Kagero Urafushi). Magnifi's most beloved disciple, and Trucy's biological father. As enigmatic as his master, this man would never lose his smile in the face of a challenge or a test. Incredibly skillful, he liked to talk in riddles and never cared to even put his life on the line in a gamble for victory and glory. For a long time, he had set his eye on Magnifi's daughter, Thalassa until she left the Troupe to marry another man. However, one day, she returned in grief as her husband had died while on a trip. Zak took this chance and started pursuing her once more, until she fell in love with him as well. They married and had a daughter named Trucy. Later, the Troupe disbanded and Zak found himself accused for having killed his master Magnifi. Being the trickster he was, no matter the outcome, he had already arranged for a last magic act of vanishing before disappearing for long seven years. Until one day a mysterious gambler, only known by the name of Shadi Smith, appeared at the Wonder Bar and challenged pianist Phoenix Wright to a game of poker...

"It is forbidden for a magician to have a good imagination."

Real name: Unknown. The second of Magnifi's disciples. Professional and more regal than his companions, Valant was a great magician who was proud of his abilities, however this was never enough for Magnifi who always seemed to prefer Zak. As such, he developed some resentment towards him. Once in love with Magnifi's daughter Thalassa, he could never fulfill his desire to have her before Zak made her fall in love with him. After the Troupe disbanded, he was summoned for one last test by his master and became an important piece on the trial dealing with his death. He spent the next years helping Thalassa's daughter Trucy and performing small venues, waiting for the day he would make his one grandiose comeback and once again amaze venues full of people all around the world with the wonders he masterfully performed and he always believed were rightfully his own.

The "lovely assistant" of Magnifi, as well as Zak, Valant and Reus. Thalassa is also the daughter of Magnifi. While only advertised as an assistant, she was skilled enough to be on par with her three companions and even her father. A calm and peaceful woman, although impulsive and a bit naive. She had an incredible voice which would eventually gain the attention of a wandering musician called Jove, whom she eventually married and had a son with. But after one tragic accident took the life of her husband, and her son went missing, she returned disheartened to her old Troupe where she found solace in one of her companions, Zak Gramarye. Both fell in love and eventually married as well, but as destiny would prove to be stubborn, tragedy would strike her once more as, after a failed magic trick rehearsal, she almost died. Later she also disappeared and remained hidden for many years. She found herself in Borginia, without memories of her past life, and became the "landscape painter in sound", Lamiroir. 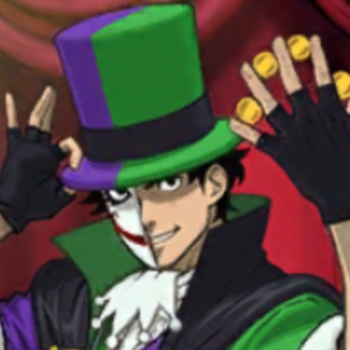 Real name: Roger Retinz (Kanenari Shinoyama). The youngest of Magnifi's disciples. Brash, mouthful and defiant. Much like his partners, he had absolutely no regards for safety when it was time to prove his amazing magician skills. However, his desire to being in the spotlight went even beyond Magnifi's own wild expectations, as he was willing to disobey him and even perform while injured. This ruthless and dangerous attitude pushed Magnifi to eventually kick him out of the troupe. After what he believed to be the biggest humiliation of his life, he vanished, just like every trace of him having been part of the Troupe. With his resentfulness and outright hatred for the troupe growing more and more, he found a new opportunity in the world of TV. Soon he would make a big name for himself as a producer, talk show host, and director of famous TV programs going as far as to be nicknamed the Ratings Rajah (Jack Yamashino). But hidden to the world, he never cut all ties with his magic roots, as he got himself an apprentice of his own named Manov Mistree to whom he gave all the rights to succeed him as the great Mr. Reus. After a while he became more willing to accept magic shows, although still resentful, on his TV programs.