Just like how defense attorneys get their own assistants, the main detectives tend to be paired up with the main prosecutors of the game. As their title suggests, they help investigate crime scenes and are usually the earliest witnesses in trials. Defense attorneys may have to coax extra information from them-the ones that would usually be reserved for the prosecutors' side.
Dick Gumshoe (Keisuke Itonokogiri)

"I'm just a lowly detective so... I'm not sure what to do with that, other than arrest it!"
Main detective of the original trilogy. Despite his skill as an investigator, Gumshoe has an unfortunate tendency to make mistakes, and as a result has a small paycheck. He is optimistic and eager to please, but bears the brunt of the prosecutors' frustrations. He is particularly loyal to Edgeworth, and becomes something of an ally to Phoenix as well.
Ema Skye (Akane Hozuki)

"Ah, the power of science. It's my life."
Main detective of the fourth and sixth games. She appeared first as Phoenix's assistant in the DS-exclusive case of the first game, Rise from the Ashes. She loves science with a child-like passion, and as a teenager dreamed of being a forensic scientist. She failed the test for it before Apollo Justice and was made a detective instead, becoming moody and bitter about it. By the time of Spirit of Justice, however, she finally passed and was able to live out her dream. Ema admires both Phoenix and Edgeworth greatly and will willingly help either of them if the need arises. She has a fondness for cute things and even signs her name with a love heart at the end as "Ema Skye ♥".
Bobby Fulbright (Gouzou Ban) 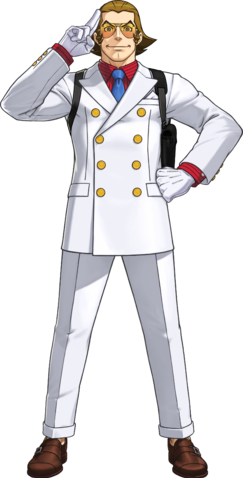 "In justice we trust!"
Main detective of the fifth game. A hot-blooded detective with the catchphrase "In Justice We Trust!", he has worked with Simon many times and is paired up with him in court. The detective hopes to help the prosecutor redeem himself after he was imprisoned. He's friendly and very energetic. However, this doesn't keep him from fulfilling his duties and he will remain strong when pushed far enough (such as if Simon tries to escape for example). Bobby has such a strong sense of justice that he is compelled to intervene when others are in trouble, and he will even help defense attorneys if it leads to a fair trial.

One day while investigating, he met an important person that lead him to become an important player in the events of Dual Destinies. For more information on this, you can see the profile of this other person in the "Turnabout For Tomorrow" section here. Careful though, you can get spoiled.

"Lang Zi says: The reason people judge people is because people are people."
Edgeworth's rival in Ace Attorney Investigations, an international detective who is brash and dismissive of those he dislikes (especially prosecutors, since a corrupt one ruined his family's reputation), but cares deeply for his men. He practices a philosophy of "detention" which often leads him to suspect the wrong people, forcing Edgeworth to prove that they didn't do it before he can arrest them.

"Come along, now! Shall we embark together on a journey of deduction?"
The Great Detective himself, Sherlock Holmes is a consulting detective famed throughout the world through the published accounts of his adventures. He is known for his keen deductive ability and observation skills. He meets Ryunosuke and Susato while investigating a murder onboard the Alaclair.

"We can't transfer the evidence out. There are too many questions left unanswered!"
A detective that was in charge of the SL-9 case. Death caused by a stab wound in the chest.
Daryan Crescend (Daian Mayuzuki)

"Say "hi" for me, OK? Oh, and "screw you". And tell [Klavier] I want into that crime scene!"
An International Affairs detective who also plays guitar in Klavier's band. Appears in the third case of Apollo Justice. He has a strange fear of planes.
Candice Arme (Hozumi Kaku)

A detective who was in charge of a case involving a bombing incident and was found dead at the remains of the courtroom bombing.

A detective working with Jacques Portsman. Died when coming upon a thief ransacking Edgeworth's office.

"...Do I need to teach you a thing or two about how to talk to adults, kid!?"
A hardened detective (we're not kidding, he looks like he'd be more at home in Sin City) who's worked many cases with Calisto Yew and Byrne Faraday investigating the Yatagarasu.
Wataru Shirase (Rip Lacer)

A detective and frequent colleague of Manfred von Karma. He was initially the lead detective on the IS-7 incident, only to be reassigned to interrogating the suspect after apparently screwing up and forgetting to inform von Karma about important information.

The late father of Shi-Long Lang. He was the main investigator of the SS-5 incident. He realized that there was a conspiracy and started investigating it. However, the evidence was manipulated by a corrupt prosecutor, who then blamed him and his investigators. The scandal tarnished the reputation of the House of Lang and caused Shi-Long Lang's grudge against prosecutors.

"If Milady were to have THE Holmes say even one bad thing about me... Something like, "Gregson? He's terrible. He's really been getting full of himself lately." What would happen to my salary?!"
An inspector from Scotland Yard, who has a (one-sided) rivalry with Holmes. He is a fan of Iris Watson. Loves fish and chips.
Gina Lestrade

"Keep your nose where it belongs, mate! I can't stand cheeky detectives like you! Bugger off or I'll sue!"
A detective-in-training under Gregson's tutelage in DGS 2. Formerly, she was a pickpocket street kid who lived in the east end of London trying to make ends meet for her fellow orphans.
Genshin Asougi

A transferee from Japan and a detective who worked closely with Scotland Yard who was investigating the Professor case. Kazuma Asougi's father.

"...The dog Detective Gumshoe takes care of just up and ate a Samurai Dog earlier as well. Poor little dog, slowly coming to resemble his handler." - Miles Edgeworth
A Shiba Inu police dog cared for by Gumshoe. One of the optional tools offered by Gumshoe in Case 1-4, he later appears in Investigations to help find evidence in case 5.
Taka (Gin)

Simon Blackquill's trusty pet hawk. Has a habit of assaulting defense attorneys and witnesses whose behavior isn't to his master's liking.

A man who is assigned to guard the visitor's room in the Detention Center.

The head of the Criminal Affairs Department. He's the proud creator of the Blue Badger and is often shown sitting at his computer reading up on the news.

"You know, we should all go swimming together sometime! Jolly!"
Highly eccentric Police Chief. Although he does some pretty odd things (for a guy that intentionally looks like Zeus), he's highly intelligent, clever, and cunning. He used to be Lana's partner when both were detectives.
Jake Marshall (Kyosuke Zaimon)

"When there's gunshots, there's bound to be bullets."
A Cowboy Cop and ex-detective that was demoted to a patrolman after SL-9. Because of the suspiciousness of the decisive evidence, the abruptness and hastiness of his demotion, and the fact that he wanted to know the truth behind his kid brother's death, Officer Marshall refused to let the case go.
Mike Meekins (Susumu Harabai)

"Sir I... I wish I didn't have to tell you this... but last year, tragedy struck a rising star at the precinct! I lost my case files four times... in three days! They fired me!"
An over-enthusiastic cop that is unnecessarily respectful in speech (he broke the dialogue boxes in the Japanese version). He's not the brightest bulb, doesn't have much luck, and is rather clumsy. He looks up to Gumshoe and aspires to be like him.
The Blue Badger (Taiho)

"What the hell is that wriggling piece of plywood?" - Miles Edgeworth
The mascot of the police force. Plays a significant role in case 1-5. It becomes the mascot of Gatewater Land in Investigations and gains a family of badgers which includes the Pink Badger, the Proto Badger, and the Bad Badger. The Badgers are also used as the mascots of the Gavinners.
Dustin Prince (Mamoru Machio)

Maggey's former boyfriend, and also a police officer. Died due to a broken neck sustained from a large fall.

Dahlia's step-sister and a former police sergeant. She was the one who arrested and got Terry convicted. Dies of a stab wound.

BUT I DO NOT LIKE TO SPEAK. SPEAKING IS INEFFICIENT. ENERGY EXPENDITURE: SPEAKING > TYPING UNDERSTAND?
A bomb technician who works for the police force. Was tasked with disarming the bomb that destroyed the courthouse. Although he can speak normally, his preferred way of communicating with others is by typing phrases into his wrist-mounted computer and then having the computer speak for him.
Shih-na

"...If you are done playing games...!"
Lang's assistant, a demure, seemingly albino woman with a penchant for sunglasses.
Marī Miwa (Patricia Roland)

"A proper greeting should begin with a hug AND a kiss!"
The director of the prison and the detention center. She is an animal lover who believes in animal therapy.
The Jurors

A constable devoted to his duties, and a witness to Viridian Green's stabbing.

The head coroner of Scotland Yard, who works at the forefront of the legal system's march towards forensic science.

Dr. Sithe's daughter, who works under her as a coroner.

The head warden of Barkley Prison.

A police officer who cornered Tarkington and his hostage, Chancey Lanboni, killing the former but getting wounded in the process.

A private detective in the Miles Edgeworth manga who is hired to protect "Officers" from the Gentlemen thieves.

The recurring female character in the manga who is one of the officers working with Gumshoe.

The Deputy Chief of the local police station. He's trying to make Chief of Police and is called the "Armchair Detective" because he can solve the whole case without moving out of his armchair. He once worked with Edgeworth to convict Yardley Kidman, which was the case that makes him on the path to be promoted to chief of police.