Note: Due to the sheer amount of marked spoilers, all spoilers for Dual Destinies have now been unmarked. Read cautiously!

"I always seem to go into coughing fits whenever I get nervous. This kind of thing never happens *cough* at home in the forest, though. *cough*"

Athena Cykes's friend and the first defendant in Dual Destinies. She was accused of planting a bomb in one of the courtrooms of the courthouse, and Phoenix must prove her innocence. She gets nervous easily and likes knitting. She serves as the Student Council President at her school, the Themis Legal Academy, and hopes to become a judge one day. She is also the defendant of the third case, which takes place sometime before, as the circumstances of the mock trial she designed ends up bearing a strong resemblance to the actual murder that takes place.

The Monstrous Turnabout (Gyakuten no Hyakkiyako)

A friend of Trucy's, and the daughter of the head of the Tenma family. She has a total phobia of Youkai, and is always slapping charms on things to protect herself from them.

"Unworthy as I am, I, Damian Tenma, shall breach these walls... ...so that I may treat my benefactor to some tea, and maybe some cookies, too."

Jinxie Tenma's father and the mayor of Tenma Town. The prime suspect of Rex Kyubi's murder. 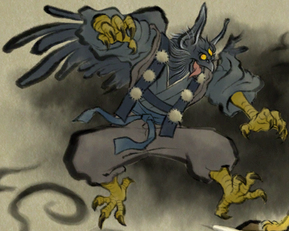 A demon resembling a tengu, sealed away in the Forbidden Chamber of the Nine-Tails Vale and feared by the residents. It was spotted near the crime scene by Jinxie Tenma around the time alderman Kyubi was murdered. Before long, Tenma Taro becomes a major part of the case even when much of the cast doesn't believe in its existence.
Phineas Filch (Kumabee Zeniarai)

"I knew ya'd understand, Mr. Lawyer, sir! Ya obviously got a big heart! As big as the wad o' cash in your wallet, I hope, eh heh heh!"

The caretaker of the Nine-Tails Vale's alderman's mansion. He tends to be petty when it comes to snatching things such as Apollo's bracelet. He disguised himself as Tenma Taro on the day of the murder.

"Now if [you] would excuse me. It's time to touch up my makeup."

A man working for the Tenma family as one of their secretaries and frequently uses a special brand of perfume and dyes his hair to various colors. The introduction to Case 2 strongly implies that he is responsible for the murder of Rex Kyubi. It's not a lie. He murdered Rex Kyubi in an elaborate plot to gain access to Tenma Taro, a gold ingot. He needs the money because his efforts in creating a cosmetics brand for only himself have rendered him bankrupt. 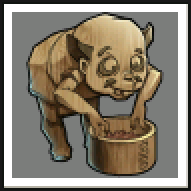 Phineas Filch's grandfather, who, according to him, was a Robin Hood-esque thief. He had stolen the gold ingot, "Tenma Taro", years before the events of The Monstrous Turnabout without anyone realizing it.

An orca that takes part in many amusement shows at Shipshape Aquarium alongside her trainer Sasha Buckler. Suspected of killing the aquarium's owner. Is actually one of two orcas that Jack Shipley found, one named Ora and the other being Orla. When the first orca was accused of killing her trainer, Azura Summers, Jack and Dr. Crab pretended to have Ora the First killed (but faked her death and moved her to another aquarium), and put Orla in her place.

"You min-now it! I'm Sasha Buckler! I perform like an agile catfish in our pirate show! It'll blowfish your mind!"

An entertainer at Shipshape Aquarium who works as Orla's trainer. She too is dressed like a pirate. She becomes the defendant during the second half of the case. She has a heart condition that could put her future as an entertainer at risk, and is taking medication for it.

"Ahoy! Yo! Yo! Yo ho hooooo! Prep for the battle, prep for the war! Little lady Rifle gon' even da score! Ya'll think you can escape with your pride? Nuh uh, you just gon' be straight up denied!"

A scrawny rookie employee resembling a rapper who works as an animal feeder at Shipshape Aquarium. Loves animals and rapping, and a friend of Pearl Fey. The case's culprit, though he didn't kill Jack Shipley. Believing Orla to be the orca who killed his girlfriend, Azura Summers, a year ago, he attempts to murder her by draining the show pool's water while the orca pool is being cleaned. Jack Shipley found out and tried to stop him, but slipped on the show stage's floor and fell all the way down to the stage's pool floor to his death, even though Rimes tried to save him.

"I write the truth. And I will find the truth with my own eyes!"

A famous nonfiction writer wearing a black coat and a perpetually-floating white scarf. Hired by Marlon Rimes to investigate the aquarium, but also to set her up as a witness to the "murder" of Jack Shipley. Because of the book she wrote about the death of Azura Summers a year ago, she is all-but-banned from visiting the aquarium.

Shipshape Aquarium's resident veterinarian who wears a penguin mask. When Ora the First was ordered put down, he and Jack couldn't go through with it, so they faked her death and put her in another aquarium. Is (illegally) using a device named TORPEDO to check on all the animals in the aquarium.

"I will now demonstrate the very moment of genius that transcended even perfection!"

A cool-headed Themis Legal Academy defense attorney student wearing a blue uniform. O'Conner is supposedly an excellent student due to his perfect test scores and him being an ace at archery. However, his test scores are because of defense attorney teacher Aristotle Means accepting bribes from O'Conner's parents to fake his test scores. That, and he's a 25-year-old working part-time as a construction worker. 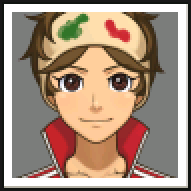 "IIIIIIIIIII'M ROBIIIIIIIN NEWMAAAAAAAAN!!! I want to become a great artist! I practice day and night!!! YEAAAAAAH! NOOOOOO! That's not it! Art's gotta be sincere, maaaaaan!!!"

A hot-blooded Themis Legal Academy prosecutor student wearing a red uniform. Newman also works with ceramics and has the tendency to dash his artwork against the ground if he doesn't consider a piece passionate enough. Newman is actually a girl who had been strictly raised as a boy for her whole life. She joined the academy to study law as her parents wanted to but seemed to have taken more of a liking for art than being a prosecutor. 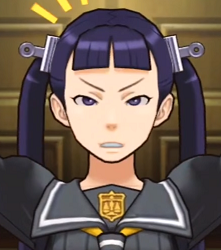 "Sss, sss, sss. It's the fate of we who live in the shadows. There's a very good reason why none may see my face by the light of day!"

A suspicious Themis Legal Academy student who hides her identity by covering herself with a cardboard box. She's the sole staff member of the school's newspaper, which she has turned into a scathing, tabloid-like journal of gossip and other mean-spirited "news" (she wears the box to make it easy for her to eavesdrop on others). In reality, however, she's found herself very lonely and isolated. Though she turned that sentiment into bitter gossip through her newspaper, she really wants to be part of Juniper, Hugh, and Robin's clique.

A famous astronaut who is friends with Apollo Justice.

"Commencing guest registration! Please tell me your name. A nickname is fine, too!"

One of the robots found in the space station, who specializes in guiding visitors.

"I like robots MUCH better. At least you can make them any way you want them. Unlike humans, with their petty emotions and constant worries..."

The older sister of the prosecutor/convict Simon Blackquill, and a scientist at the Space Center.

"For I am Yuri Cosmos! Director of the Cosmos Space Center, which was of course named after me, Yuri Cosmos! ............ Don't you have anything you wish to ask me?"

Chief of the GYAXA space program and space center, a proud man who rides a not-quite-Segway everywhere he goes.

Turnabout for Tomorrow (Mirai he no Gyakuten) 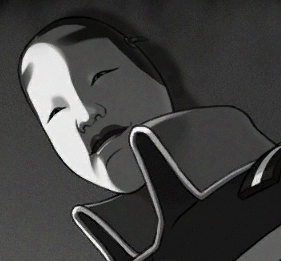 An international spy who infiltrated the police force at least a year before the start of the game. A master of disguise and a skilled actor who has complete control over all of his emotions, he, along with the Big Bad of Apollo Justice: Ace Attorney, ushered "the Dark Age of the Law". His true identity, looks, and personality are unknown.