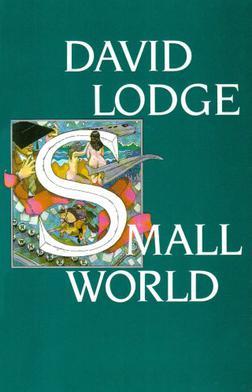 For there is nothing lost, that may be found, if sought.
Advertisement:

“It's the only thing that keeps me going these days, travelling. Changes of scene, changes of faces”

Small World: An Academic Romance is the seventh novel by David Lodge, published in 1984. Taking the Grail Legend as its model, it draws on the author's experience as a Professor of English Literature to satirise academic conferences, rival schools of literary criticism, academics in general, writers, writing and, indeed, Tropes. Especially Tropes.

The novel is in five parts.

Part 1 takes place in April 1979 at a small academic conference hosted by the University of Rummidge (based on Birmingham). Philip Swallow, who first appeared in Changing Places, is now a full professor and head of the English department. He has used the opportunity to invite his co-protagonist of the earlier novel, Morris Zapp of Euphoria State University, to be the keynote speaker. Also at the conference are Persse McGarrigle, a young lecturer at the University of Limerick who has just completed his Masters on T. S. Eliot, and the beautiful and mysterious Angelica Pabst to whom Persse confesses his love before she leaves suddenly without telling anybody. Much of the novel follows Persse on his travels in pursuit of Angelica. Swallow and Zapp, who haven't seen each other in the ten years since the events of Changing Places, take the opportunity to catch up. Zapp tells of how he has turned from being a Jane Austen specialist to being a Deconstructionist

in the footsteps of Jacques Derrida. He also reveals that his marriage to Désirée has broken up and she has written a book, Difficult Days, which detailed Zapp's sexist shortcomings and became a best seller. Swallow in turn tells of his disappointment that no review of his monograph on William Hazlitt

has appeared and how, while staying with a representative of the British Council

, he slept with his host's wife Joy. Shortly afterwards he read that the whole family had dies in a plane crash.

Part 2 goes round the world, time zone by time zone, introducing various characters and what they are doing at the same moment. Morris Zapp is flying to a conference and meeting Fulvia Morgana on the plane. In Turkey, Akbil Borak is reading Hazlitt in preparation for a visit by Philip Swallow. In Australia, Rodney Wainwright is writing a paper for a forthcoming conference. In New York, Siegfried von Turpitz and the distinguished but ailing Arthur Kingfisher are discussing the proposed UNESCO chair in literary criticism, essentially a lucrative sinecure. In Tokyo, Akira Sakazaki is translating Ronald Frobisher's novel into Japanese. In England, Ronald Frobisher is having breakfast. In the US, Désirée Zapp is at a writers' retreat trying to write a novel. At Heathrow Airport, Cheryl Summerbee checks Persse McGarrigle onto a flight and they chat about Cheryl's fondness for trashy romances. The lives of many individuals are revealed to be interlinked by a series of coincidences.

In Part 3 characters are seen flying from conference to conference. Persse tracks Angelica to Amsterdam, where he hears von Turpitz speaking about his forthcoming book and realises that it is his own work. Later he sees Angelica's face on a poster outside a strip club. Philip Swallow meets Joy, the woman he thought was dead, and they embark on an affair.

In Part 4 Morris Zapp is kidnapped by a guerrilla group. He is saved by intervention from Fulvia after Désirée refuses to pay the ransom. Back in Ireland, Persse receives an award and an American Express card he has causally applied for arrives, giving him the chance to continue his pursuit of Angelica. At Heathrow he finds a coded message from her in the airport chapel, referencing The Faerie Queene. After trying in vain to buy a copy from the Airport bookstall he finds Cheryl now reading Orlando Furioso instead of her habitual trashy romances, and she is able to give him her own copy. But Persse is too obsessed with Angelica to be able to see Cheryl's feelings for him. He sets off around the world on his Amex card, trailing Angelica to Zürich, Honolulu, Tokyo (where he meets Akira Sakazaki in a karaoke bar), Hong Kong and eventually Jerusalem, but she is always one step ahead of him. In Jerusalem, Philip is with Joy when he meets his son, who is on a backpacking trip. Mortified, he takes to his bed causing a rumour of Legionnaire's Disease to spread, which brings the conference and Philip and Joy's affair to an abrupt close.

Part 5 takes place at the Modern Language Association of America's conference in New York, in January 1980. Arthur Kingfisher chairs a panel discussion with Swallow, Zapp, Morgana, von Turpitz and others. Persse rises to ask a question, "What follows if everybody agrees with you?", which wrong-foots the panel members and awakens the interest of Arthur Kingfisher. In a series of dramatic events accompanied by a sudden unseasonably warm and sunny spell in Manhattan, revelations are made, loose ends are tied, Arthur Kingfisher successfully makes love with his assistant and announces that he is making himself available for the UNESCO Chair, and Persse finally realises that Cheryl, not Angelica, is the woman for him.