Literature / The Castle in Transylvania 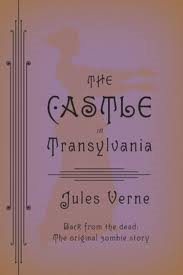 The book actually has nothing to do with zombies, but then again, most holograms look like walking corpses anyway.
When most people think of Jules Verne, they usually aren't thinking of his single Gothic Horror novel published in 1893. The Castle in Transylvania starts off as the archetypical Haunted Castle story: the villagers of Werst, a town west of the Carpathian Mountains, notice that various strange things are occurring in the long abandoned castle of Baron Rodolphe de Gortz and believe that it is now inhabited by the devil. Count Franz de Telek, a visitor to the area, is intrigued by these superstitions and decides to go investigate the castle himself. Things start to get strange when the Count runs into La Stilla, an Italian Singer, who he believes is being kept prisoner inside the castle. But La Stilla has been dead for years...

The Castle in Transylvania displays these tropes: