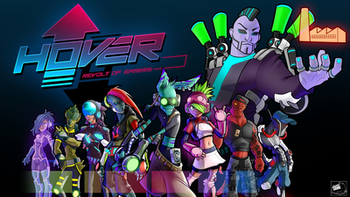 Hover: Revolt of Gamers is a 3D platforming parkour based action adventure game, developed by Midgar Studio and Fusty Game, and published by Playdius and Plug In Digital. Inspired by games like Jet Set Radio and Mirror's Edge, it was released on Steam on May 31st, 2017, and on PlayStation 4, Xbox One, and Nintendo Switch the following year.

On a faraway planet, there exists a city called ECP17, otherwise known as Hover City. Everyone lived peaceful lives, until the Great Admin of the city seized the reins, creating a cruel dictatorship where fun and entertainment are banished and illegal. With no way to contact the Galactic Union, people are beginning to lose hope.

Enter the Gamers, a group of rebels who fight against the Great Admin’s rule, with their own high tech gear, created for running, jumping, and best of all, playing. Their mission is to help citizens, sabotage Anti-Leisure Propaganda, and most of all to get help from the Galactic Union to stop the tyrannical rule!

The game features both single and multiplayer functions, which can be switched either on or off to play the adventure.