Pleas note that due to the nature of the character, the tropes described here are continuously warped and overwritten throughout Iris's adventures, even more so than is common in the Doctor Who Expanded Universe. 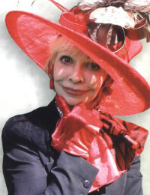 Supposedly another renegade Time Lord, although she's more of a constantly changing canon wildcard: a Fourth-Wall Observer who dashes in and out of plotlines with little regard for the laws of time and space. Her TARDIS looks like a red double-decker London bus, and she has a habit of claiming that many of the Doctor's escapades were really hers. She originated in a series of wildly unrelated novels and immigrated into the Doctor Who novels a few years later. In Big Finish, she played a key role in the four-part Excelis trilogy, met up with Six in the main range, had adventures with Bernice Summerfield (as well as with Jo Grant), and eventually got her own proper Big Finish spinoff series.

Iris's TARDIS — a beaten-down, cluttered double-decker no. 22 to Putney Common. She's smaller on the inside.

In early November 2000, Tom was kidnapped by Iris when he thought he was catching the bus to Putney Common. He continued to travel with Iris before settling down on earth as an author, but was dragged back onto the bus ten years later.

A butch, snarky traffic warden who joined Tom and Iris on their transtemporal adventures.

A talking stuffed panda. Dislikes being called a bear or being reminded that he's stuffed; likes pretty girls, alcohol and a good book.