Characters appearing in the Gallifrey audio series by Big Finish. 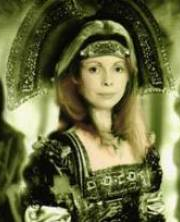 The second regeneration of Romanadvoratrelundar became Gallifrey's President after returning from E-Space, replacing acting President Flavia. After having spent the first twenty years of her rule stuck in a Dalek prison, she resumed her office with a renewed desire to modernise Gallifrey and reform its xenophobic policies. To this end, she opens up the Academy to alien races — which earns her plenty of resistance from the right-wing end of the political spectrum. To make matters more complicated, her first regeneration is present inside the Matrix with her own share of secrets, and her third shows up from the future. 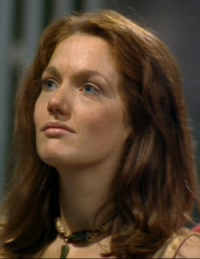 Leela of the Sevateem married Andred, and spent twenty-five years happily living with him in the Citadel — though never accepted as part of Time Lord society. When all that changes, she becomes the Presidential bodyguard and close friend to President Romana. She pops into the Jago & Litefoot audio series as well, acting on behalf of the Time Lords. 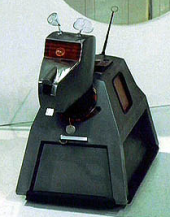 Given to Romana and Leela by the Doctor, the two Robot Dog units are in close contact with each other and work as a team. 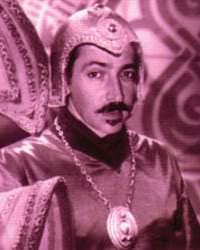 I like to be independent on the right side.
Voiced by: Miles Richardson

Cardinal Irving Braxiatel is an art collector and smarmy politician, with significantly less regard for the Laws of Time than most others around him. He gets around. Strongly hinted to be the Doctor's older brother in various stories. For his tropes in the Bernice Summerfield audios, see here. 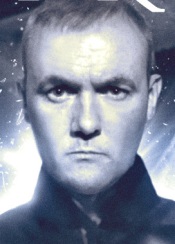 You can’t let her stab me, K9, it’s not legal!
Voiced by: Seán Carlsen

Coordinator Narvinectralonum is the head of the Celestial Intervention Agency, following in Vansell's footsteps. He's dour, mistrusting and doesn't especially like anyone else on Gallifrey, but takes great pride in his work and tries to remain politically neutral. Also appears in the Big Finish "Dark Eyes" range, where he encounters the Eighth Doctor.

Andredaselus is Leela's husband, a Time Lord and member of the Chancellery Guard. The two met on Gallifrey after the Sontaran invasion. He's missing and presumed dead at the beginning of the series, but the truth is a little more complicated. 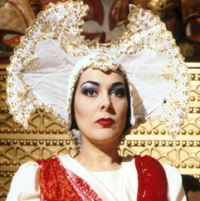 Inquisitor Prime Darkelatraquistahastrad first appeared in the Trial of the Sixth Doctor in the TV series, and later became one of Romana's main political opponents. Perhaps a little too far on the conservative end of the political spectrum.

The first female Lord President of Gallifrey, who styled herself Imperiatrix: dictator. Now living on in the Matrix. The embodiment of all ambition and evil, past, present and future.

A terrorist group, who aim to make time travel available to all races and abolish the quarantine planet set up for unauthorised time travelling asylum seekers. Perhaps a little too far on the progressive end of the political spectrum.