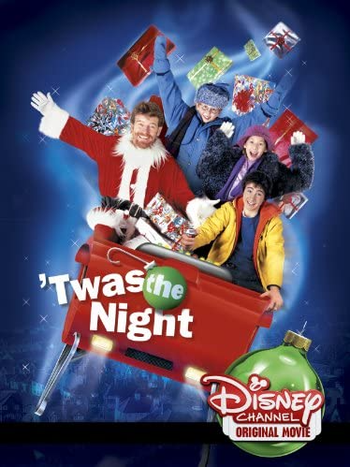 Danny Wrigley (Josh Zuckerman), is a boy who idolizes his adventurous and cool uncle Nick (Cranston), much to the chagrin of his father who sees Nick as the irresponsible con artist that he is. On Christmas Eve, when Nick's latest money-making scheme backfires he's left running from his embittered partners-in-crime and he attempts to hideout with his brother's family until he can find enough money by his deadline of Christmas morning. But when his attempts at a cyber scam go awry and accidentally knocks out Santa's new computer-operated sleigh when its passing over the house Nick and Danny find themselves in possession of the sleigh with Santa's magical powers at their disposal. Danny wants to complete the injured Santa's rounds, while Nick sees an opportunity. Meanwhile Danny's younger sister, Kaitlin (Brenda Grate) and brother Peter soon discover Santa (Jefferson Mappin) passed out in their living room and try to help him set things right before the night is done.Yes, this is a Disney Channel Original Movie about Walter White stealing Santa Claus' powers on Christmas to commit crimes seven years before Breaking Bad would premiere, essentially being Breaking Bad meets The Santa Clause.Also, its directed by Michael Myers.

'Twas The Night includes examples of the following: