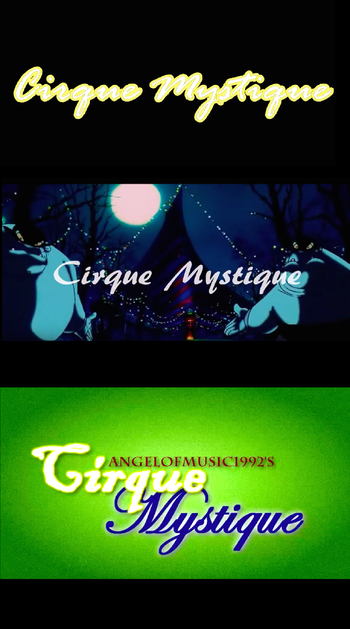 "Welcome to Cirque Mystique"
"It's not that different from any other circus, except for one big thing. Everything that happens on stage...It's all real. It doesn't matter who you are, what you are, or what your special ability is. We are all bound to him. Well, I've introduced myself. Who are you in Cirque Mystique?"
—Esmeralda
Advertisement:

As described by the Admin:"The Cirque Mystique is a traveling circus/magic show. It has the usual stuff: tight rope walkers, magicians, clowns, etc. But there's one big thing that sets them apart from all the rest: Everything that happens on stage is real. A guy turns into a bear? It's real. A dancer disappears into thin air? It's real. A guy breaths out fire? It's real. Of course, the audience doesn't know this. They just think it's special effects. Dr. Facilier is in charge of the whole thing. He finds people with talent/special powers and puts them in his show. Once you're in, you're basically in for life. So, what's your character? You have a bunch of possibilites ahead of you."

is a YouTube Forum Non/Disney Roleplay firstly created by angelofmusic1992 as the Administrator while Zuyuri as the Moderator. The roleplay tackles on the members of Cirque Mystique, with Dr. Facilier as the Ringleader, plotting on different stories of individual characters played by their respective YouTube users and engaging on different events such as Fan Vid and Arcs. Its threads and plot arcs are held in ProBoards

It technically had the rule of All Animation Is Disney, Anime, and use of 2D Characters until it was announced that any types of animation are allowed, including 3D animation. Therefore, the participants of the roleplay were given three types of species depending on which existing characters from any forms of animated movies, cartoons, or anime they choose:

The roleplay was officially opened on September 4, 2011. It is one of the longest running Youtube roleplays, lasting for six years.

Cirque Mystique closed their curtains on June 7, 2017 from the Admin's announcement of the Cirque Mystique role-play being shut down. Its ending video is shown here