Recap / The Amazing World of Gumball S2E17 "The Bumpkin" 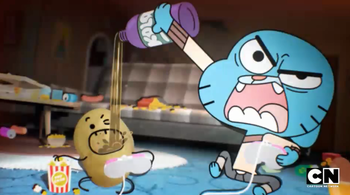 After realizing that there's nothing to going to school and later living a 9-5 life, Gumball invites Idaho (a potato who lives in the country) to teach the family about living a simple life.